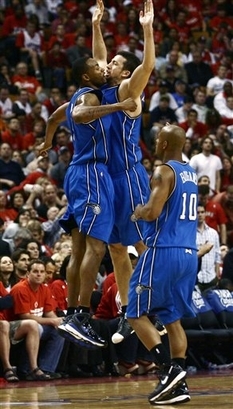 I don't think there are enough words to describe how proud I am -- and how proud we all should be -- of our team. The Magic outscored the Raptors, 33-20, in the final period of yesterday's Game Four to secure a 106-94 victory and a 3-games-to-1 lead in their first-round playoff series.

Our guys battled back from an early deficit to seize control of the game in the fourth quarter. Allow me to heap superlatives on them:

Basically, we had an answer for everything Toronto threw at us. 39 points for Chris Bosh? Fine. 13 assists for T.J. Ford? Okay. Didn't matter. We were simply the better, gutsier team yesterday, and that bodes well for us as the series continues.

That's not to say we're worldbeaters or anything. Being up 3-1 is nice and all, but it doesn't mean we're about to win the series. The last time we were up 3-1, well, the Pistons ate our lunch in the next three games thanks to Tracy McGrady's big mouth, so pardon me for not pulling out the confetti just yet. But our victory yesterday was so impressive that Yahoo!'s Kelly Dwyer thinks we'll make the Finals by 2009 if we strengthen our second unit. I hate to forecast so far into the future, but there's no question that we're making a strong case for belonging in the discussion about the NBA's elite teams.

I am thoroughly impressed with the victory. A similar effort tomorrow night, even if Jose Calderon (2 points, 1-of-7 shooting) and Ford (12 points, 6-of-16 shooting) finally get back on track, should result in a series victory and a spot in the second round of the playoffs.