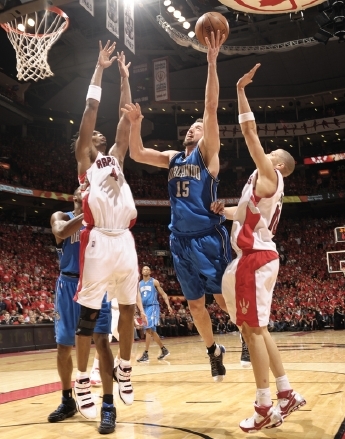 The Raptors jumped out to a hot start last night and never looked back, winning Game Three of their first-round series with the Magic by a final score of 108-94. And you know what? I'm not surprised. At all.

The Raptors had a raucous crowd that puts ours to shame. That's not to say that we in Orlando are bad fans, but rather that the Raptors Nation (read: Canada) is simply more passionate. And with all those fans screaming their lungs out as the Raptors jumped out to a 28-20 first-quarter lead, there was no doubt that it was simply not going to be our night.

Let me just laud the Raptors a bit:

However, we did some things right, too. We never gave up, even trimming what had been a 23-point lead to single digits early in the fourth quarter. As Kelly Dwyer noted at Ball Don't Lie, that sort of resiliency will help us in the later round of the playoffs, assuming we make it that far. Mike Bianchi disagrees, but I don't share his point of view. It's not like we put our heads down and mailed in the rest of the game. If we had, the loss margin would have been much greater than 14 points.

Over at the Sporting Blog, Bethlehem Shoals (of FreeDarko fame) writes that this series "might go the distance." Given how evenly played this series has been -- through three games, the Magic have scored 312 points, the Raptors have scored 311 -- I'm inclined to agree. The problem for us is that the Magic are trending downward and the Raptors are trending upward. But I'm not worried. We were due for a crappy game, and I fully expect us to leave the Air Canada Centre with a win tomorrow night. We aren't going to brick our three-pointers forever, no matter how noisy the crowd. Last night's loss was a mere bump in the road to the Conference semifinals. As Sleater-Kinney once said, "Don't worry. You got it."