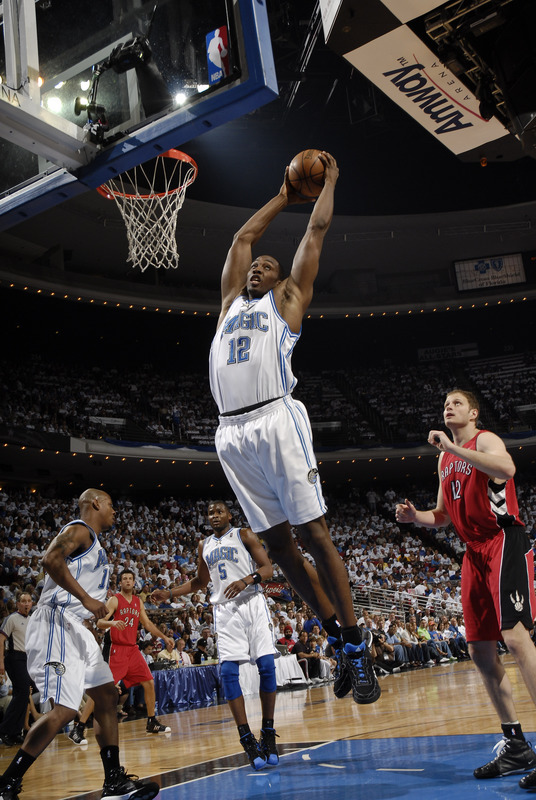 Dwight Howard pulls down one of his 22 rebounds to ignite an Orlando Magic fast-break in their 114-100 victory over the Toronto Raptors.

Wow. What a game, right?

The Magic got of to the hottest start imaginable against the Raptors in their first series-opening home playoff game in over a decade. They shot a blistering 80% in the first quarter, hitting 9 of their 11 three-pointers, and scored 43 points in the period. The Raptors had no answer for, well, anything. Many of the three-point attempts were uncontested.

But the hot shooting wasn't the only reason the crowd was pumped up. Dwight Howard blocked three shots in the first nine minutes, setting the tone defensively. And Hedo Turkoglu got his once-a-month driving dunk in, barreling into the lane from the left corner, elevating past Andrea Bargnani, and throwing it down with his right hand.

The first period showed the differences between the teams' coaches. Our coach, Stan Van Gundy, did not change his game plan at all. We shot the three-pointer, like we have all season, and we made opponents pay for leaving our shooters open. In contrast, Sam Mitchell shuffled his starting lineup, putting Andrea Bargnani at small forward for the first time all season. He hoped Bargnani's size would present problems for Turkoglu, but he was wrong. Curiously, Jamario Moon, the Raptors' best defender and usual starter at small forward, played just five minutes. Perhaps Mitchell will be more inclined to play him more in Game Two...?

But everything changed after the first period. Obviously, we weren't going to keep shooting at an 80% clip, but the dropoff was tremendous. Simply put, we went cold. After shooting 16-of-20 for 43 in the first quarter, we went 15-of-36 for 42 points over the next two, and headed into the fourth period with a scant 10-point lead.

But that's when Dwight Howard took over.

More precisely, he didn't take over until after the Raptors pulled within 5 on a Jason Kapono three-pointer. But from then on, he decided this game belonged to him, and to him alone:

I've seen Dwight play plenty of games over the past several years, but I've never seen him dominate, on both ends of the floor, like he did yesterday. It was his best game at the professional level, and is nearly unprecedented for someone his age. Only three other players since 1986 have recorded 25-point, 20-rebound, 5-block efforts before age 23: Shaquille O'Neal, Charles Barkley, and Shawn Bradley. Of those players, only Shaq did it at a younger age than Dwight did yesterday.

So, should we get out the brooms and prepare for a sweep? No. God, no. In the 68 possessions in periods two through four, we scored 71 points, for a dreadfully low offensive rating of 104.4, so it's not like we dominated the Raptors from start to finish. Jameer Nelson and Maurice Evans won't play this well every night, just as Chris Bosh and Forderon won't play as poorly. We have the more talented team, but still only won yesterday because of (a) freakishly hot shooting and (b) Toronto's reluctance to exploit Jameer Nelson's defense. However, we will win this series. But not every game will be as easy.

Buckle up. It's going to be a long series.