We Appreciate You, Maurice Evans

Share All sharing options for: We Appreciate You, Maurice Evans 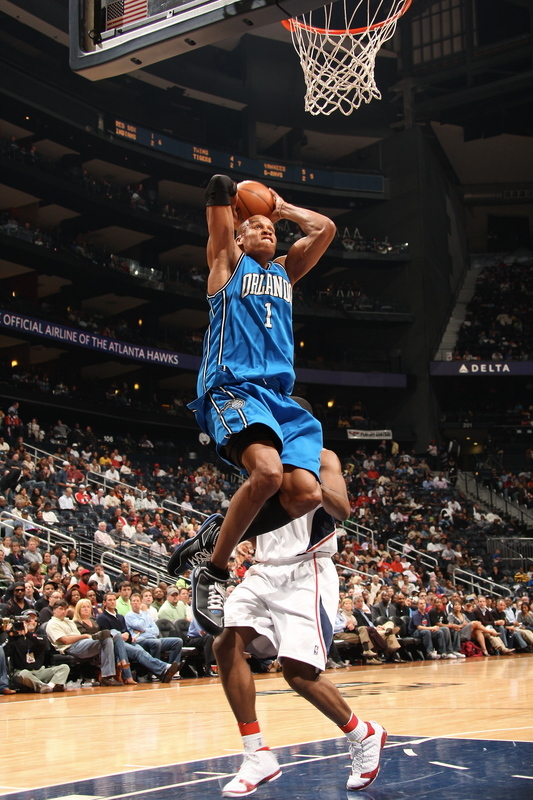 Maurice Evans made a career-high 11 shots Tuesday night in Atlanta, perhaps none more spectacular than this dunk.
Photo by Scott Cunningham, NBAE/Getty Images

Two weeks ago, With Malice hosted Unsung Player Day. Although they invited me to participate, I never got around to writing what I wanted to. Well, better late than never.

The next time you're at a party, you can mention this fact and watch as the people to whom you're taking react with amazement*: Of Maurice Evans' 253 field goals for the Magic this season, 73 were dunks and 80 were three-pointers. All told, dunks and treys account for 60.5% of his made field goals.

This stat is far from a mere amusing anecdote; it sums up numerically what we've observed empirically, namely that Evans is a solid fifth option for the Magic because he forces opposing defense to "pick their poison," as it were. Should they choose to double-team Dwight Howard they risk leaving Evans open in one of the corners, where he's a 41% shooter. And if they defense dares triple-team Howard, Evans simply cuts to the basket for an easy dunk. Obviously, that's a high-percentage (95%) shot. He's become so adept at finding these creases that Magic television play-by-play man David Steele joked the other night that "Hard Cutting" is now part of Evans' name.

If there's one negative in Evans' offensive skills, it's that he doesn't get to the foul line nearly enough -- 68 attempts in 68 games with the Magic. Considering that "inside" shots account for 43% of his attempts, one would think he'd draw more contact than he does.

But that's a minor quibble. A majority of Magic fans were displeased when the team traded Trevor Ariza to the Los Angeles Lakers for Evans and Brian Cook but it was, in hindsight, brilliant. Ariza, as dynamic as he was, doesn't have the outside shot to make defenses pay for focusing on Howard. In fact, his emergence may have made J.J. Redick expendable, at least in the eyes of Magic GM Otis Smith.

Maurice Evans isn't a great player, but he is great for us. That's what counts.

*Assuming the people to whom you're talking are kinda nerdy.