With their 15-5 start through this season's first 20 games, the Orlando Magic are just one game off their pace from one year ago. It was a good year for the Magic, as they won 52 games, a division title, and their first playoff series in 12 years. Should the outlook for this season be as rosy, given the similar record through 20 games, and in light of injuries to Jameer Nelson, Mickael Pietrus, and Keith Bogans?

In an attempt to answer that question, I decided to compare rolling point differentials of the four best teams in Magic franchise history, as determined by their final winning percentage: 1994/95, 1995/96, "1998"/99, and 2007/08. Point differential is a better barometer of a team's ability than its simple won-loss record; for instance, a 28-point win counts just as much as a 1-point win in the standings, but a 28-point win indicates a superior talent level, whereas a 1-point win indicates the victor may simply have caught some lucky breaks. If that argument sounds familiar, it should, because it's repeated ad nauseum throughout the blogosphere.Tom Ziller of Sactown Royalty made a similar graphical comparison for the Sacramento Kings last week. The results of my comparison follow the jump.

So, here's the chart, which you can click to enlarge: 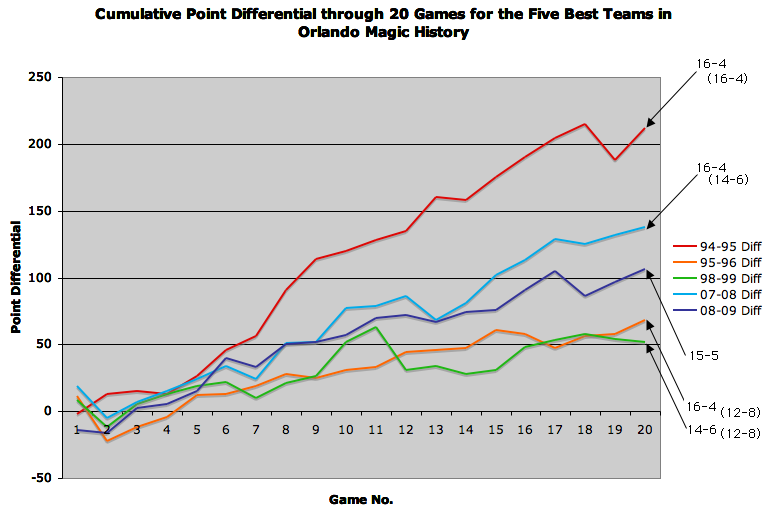 The team's actual record through 20 games is listed next to the arrow pointing toward its corresponding line; the team's expected winning percentage is listed parenthetically below the same number. A few things thus become apparent:

Let me expand that last statement: this Magic team is not dominating the early-season schedule like last year's team did, despite playing a markedly weaker schedule. Fortunately, only Boston and Cleveland have distinguished themselves in the Eastern Conference this year, meaning Orlando--which has, as previously mentioned, battled injuries to key players early--still figures to be in position to make a deep playoff run. Further contributing to this team's relative inferiority is star forwards Hedo Turkoglu and Rashard Lewis' being mired in shooting slumps well below their career averages. How the Magic perform on their upcoming road trip, which starts tonight in Los Angeles against the Clippers, will give us a much better idea of what they're capable of.

A final note on the dominant 1994/95 team: it was not without its share of humbling defeats. The dramatic drop in point differential from game 18 to game 19 is due to a 27-point defeat to New Jersey in which the Magic shot 6-of-23 from the foul line. Five days later, in a game that doesn't appear on the chart, they lost by 40 to Seattle. Ouch.