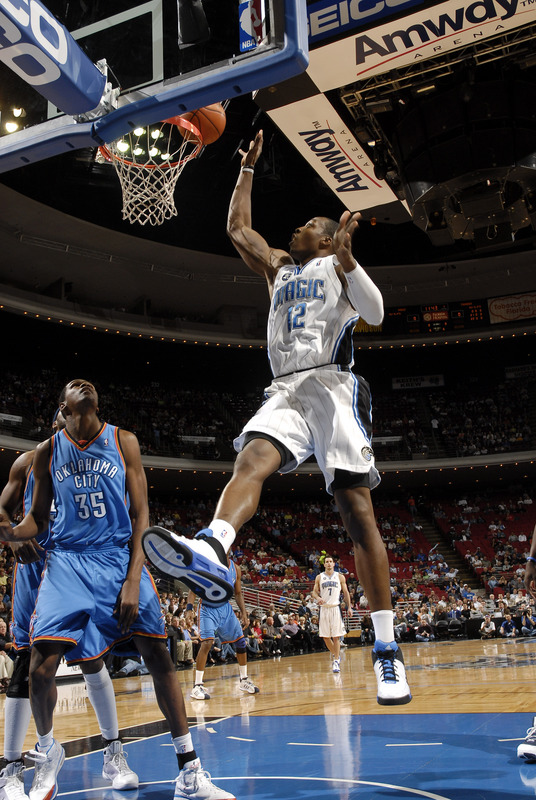 In their 98-89 win over the Oklahoma City Thunder tonight, the Orlando Magic resembled a combination of two recent Magic teams, and it wasn't necessarily a good thing. Like the 2006/2007 version that won only 40 games, the Magic played down to the level of their combination--the Thunder are a league-worst 2-18 this year. Like the 2007/2008 version that won 52 games and a division championship they bailed themselves out with the three-point shot. Prior to the fourth quarter, Orlando had been beaten to seemingly every loose ball and made Johan Petro look like Chris Bosh circa 2003. As a result, they never led by more than 8 points at any juncture through the first three periods of play.

Then they took out their boomsticks and blew the Thunder away. The Magic made each of their first 3 three-point attempts in the quarter and finished the frame shooting 6-of-9 from downtown. For the game, they shot 13-of-27, which masked their inability to get to the foul line--Dwight Howard shot 13 of the team's 16 free throws--or to defend in transition. Howard had a double-double at the end of the first period and finished with 21 points, 23 boards, and 6 blocks. His monster jam with 5:07 to play was arguably the biggest basket of the game, as it came in transition (after a Jameer Nelson steal), at home, and from very far away. Dwight elevated, cocked the ball behind his head with both hands, and threw it down hard. My buddy Lane aptly described Dwight's movement on the play as like that of a shark leaping. Scary play, and a big one.

More on the game after the jump.

I'm still not especially impressed with Russell Westbrook, even after his 19-point, 5-assist performance tonight, but he is an ideal point guard for an uptempo team because he's so darn quick. It's not just his footspeed, either; he has a sixth-sense for making deflections on defense, prompting Magic television color analyst Matt Guokas to compare him to Rajon Rondo of the Boston Celtics. Westbrook almost made what could have been a game-changing play late in the game. Trailing by 8 with 1:15 to play, the Thunder's defense refused to let the Magic get off a shot. As the horn sounded to signal a shot-clock violation, Westbrook punched the ball out of Nelson's hands and raced down the court for a layup. The officials erased the basket by ruling a shot-clock violation, giving the Thunder possession on a side out-of-bounds. Westbrook tried to make something happen in the halfcourt, but his pass to the right corner was intercepted by Keith Bogans. After running down the game-clock to 0:23, Nelson dished to Hedo Turkoglu on the left wing. Turk sank the three-pointer, Orlando's last basket of the night, and any chance the Thunder had to rally was squashed, largely by a silly rule that penalizes the defensive team's solid effort by taking away its transition baskets.

Ultimately, the Magic should be happy with the win, as well as with the healthy returns of Nelson and Bogans from injury, but not with their inability to put the Thunder away. If Rashard Lewis (11 points, 5-of-15 shooting) and Turkoglu (13 points, 5-of-17 shooting) had gotten it going, this game would have been a real romp. But they didn't, so it wasn't. Fortunately, Nelson and the Magic's reserves (the bench scored 30 points on 12-of-20 shooting) picked up the slack, and Orlando won its 15th game in 20 tries.

J.J. Redick acquitted himself after several blase games. He started and played 19 minutes--Bogans played 26 off the bench--made 3-of-5 shots, and his only free throw for 8 points. Stan Van Gundy is trying to break J.J. out of his slump by getting him shots closer to the basket, and it seemed to work. The Magic will need his shooting on their grueling road-trip, so hopefully tonight's game was a slump-buster of sorts for Orlando's 2006 first-round pick.