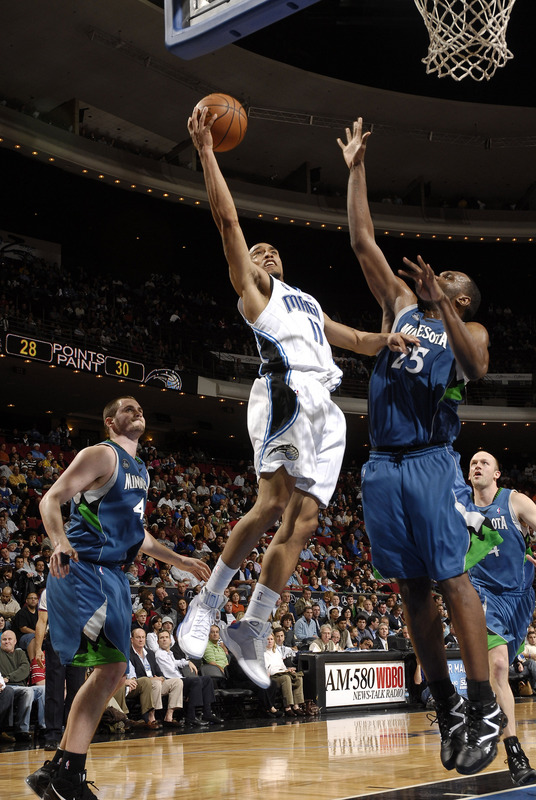 At times, it wasn't pretty, but the Orlando Magic still managed to get the job done against the Minnesota Timberwolves on Wednesday night. Dwight Howard dominated Al Jefferson with 23 points, 14 rebounds, and 6 blocked shots. Rashard Lewis also scored 23 for Orlando, and Hedo Turkoglu added 22. In the night's biggest surprise, rookie shooting guard Courtney Lee scored 19 points on 8-of-10 shooting in 34 minutes.

As the table shows, the Magic shot the lights out when they weren't busy turning the ball over. With no disrespect intended to Minnesota, but a majority of Orlando's 19 turnovers were unforced errors. The Magic were airmailing passes into the seats and dribbling the ball into the Wolves' hands. At times, they exhibited spectacular ineptitude handling the ball, which is why this game will raise a big red flag. If the Magic's shots hadn't dropped at the staggering rate they did, they may have ended up on the losing end of this game. The effort wasn't there, and against a better team it would have been a losing effort. I hope Stan Van Gundy is able to whip his team into shape before Friday's matchup against Oklahoma City. Big-time trap game, that.

Orlando didn't pull away from Minnesota until the third period. The 'Wolves had drawn to within 2 points, 44-42, when forward Mike Miller sustained an ankle injury while battling for a rebound. With Miller in the locker room, Minnesota's offense ground to a halt. Playing the next 8:06 of the game without Miller, the 'Wolves scored 4 points and committed two shot-clock violations. When he finally returned, the game was pretty well out of hand, with Orlando holding a 60-46 edge.

I'd be remiss if I concluded this recap without commenting more on Courtney Lee. He showed incredible quickness off the dribble, something I had not noticed in his earlier appearances. He was able to get to the rim at will, even against reasonably quick defenders like Randy Foye. Once he established his driving game, his jump-shot returned to him. He made all 3 of his three-point attempts, and each one was a no-doubter after it left his hand. The rotation on his shot is really a thing of beauty, as is his ability to motor up the floor in transition.

But Lee did more than score tonight. He also played lock-down defense, and came up with 3 steals by playing the passing lanes (and, to be fair, taking some questionable gambles). Finally, he moved the ball well and finished with three assists. Obviously he's not going to shoot 80% from the field every night, but he's showed signs that he could be this team's backup/sparkplug two-guard of the future.

That's all. Sloppy win, but a win nonetheless.