Share All sharing options for: I Freaking Love Tony Battie 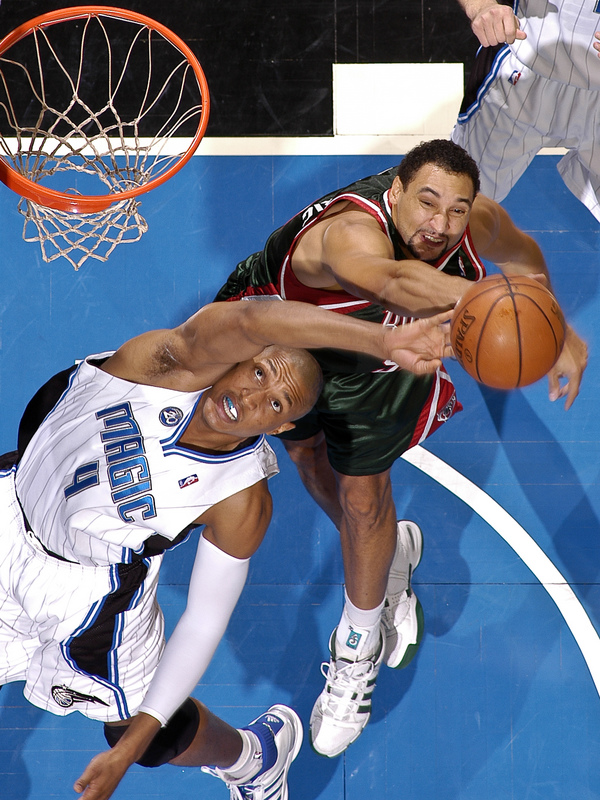 Tony Battie is the freakin' man.

The Orlando Magic desperately missed his toughness last season as he recovered from shoulder surgery. Now that he's back, Orlando is stronger on the interior, and has an ideal post player to complement Dwight Howard. His modest per-game averages of 5.4 points and 4.4 rebounds don't tell the whole story. Tony's posting those numbers in a mere 16.7 minutes per game. On a per-minute basis, he hasn't scored at this rate since his third season or rebounded at this rate since his fifth. And he's never scored more efficiently, with a crisp shooting percentage of 61.8%, which blasts his previous career best of 54.1%.

It's tempting to compare this current Magic team to the one of the mid-1990s which featured Shaquille O'Neal, Penny Hardaway, and Horace Grant. The Howard/O'Neal and Hedo Turkoglu/Hardaway analogies are a bit stale, but this one rings true: Tony Battie/Horace Grant. Battie's per-minute statistics this season compare favorably to Grant's from 1994/1995, when the Magic made their only NBA Finals appearance.

More praise for Tony after the jump.

But it's not just the stats, position, and team that make this comparison work: it's the style. Battie sinks the mid-range and baseline jumpers with stunning regularity--see for yourself, courtesy NBA.com's HotSpots--but he's also tough enough to finish inside when he needs to. Obviously, the Magic don't expect him to shoot 9-for-9 from the field for 20 points every night, as he did in Philadelphia last week, but it's safe to say that they've come to expect a lot from the 32-year-old veteran. That's not a bad thing. Of all the players on Orlando's comically weak bench, Battie is the only one who would play a significant role on a title-contending team. That he's playing so well only a year removed from shoulder surgery is a testament to more than just his talent: it's his drive, too.

On yesterday's The Basketball Jones podcast, J.E. Skeets and Tas Melas briefly discussed the possibility of the Magic's playing a tall lineup of Anthony Johnson, Hedo Turkoglu, Rashard Lewis, Tony Battie, and Dwight Howard. It's something worth considering, especially with Orlando's injury woes mounting. Replace Johnson with Jameer Nelson and I believe you'd have a championship-caliber starting lineup. Shifting Mickael Pietrus to the bench necessitates trading Keith Bogans, who could potentially be packaged with Brian Cook to net a young, solid, backup point guard to develop behind Nelson. And this potential move would not be possible were it not for the versatility Battie brings to Orlando.

Bottom line: respect Tony Battie, and ignore him at your peril.