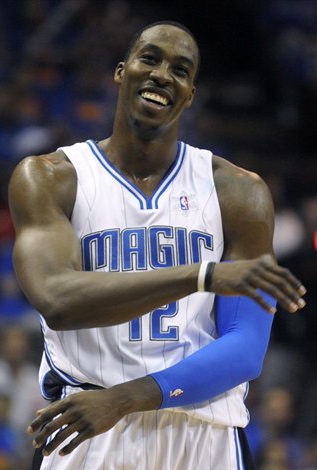 Don't let Dwight Howard's smile fool you, his team is serious about contending for an NBA championship this season.

After winning 11 of their last 12 games, all against Western Conference opponents, and sporting a 24-6 record, the question has begun to spring up.

Are the Orlando Magic a legitimate threat to win an NBA Title this season?

It's the million dollar question that 'experts' are currently trying to answer. Some say yes, others say no. So what's the correct answer?

It's yes, and I'll explain why.

We always hear the cliche, "defense wins championships." Sure, there are a variety of ways to win an NBA Title but as the Boston Celtics proved last year, it usually comes down to defense.

In determining whether the Magic are a legit Title contender this year, I decided to take a look at the past NBA champions (since 2000) and see where each of them stood defensively. There's a plethora of defensive statistics out there but I chose to concentrate on one particular stat - Defensive Rating (points allowed per 100 possessions).

It's important to note that the majority of the teams below, in their respective year, possessed an offense above-average or better statistically. I could include a team's pace, since it plays a small factor in determining a team's Defensive Rating, but I'll leave it out to simplify my argument.

Below are the NBA champs since 2000 and their specific Defensive Rating (ranking & league average each in parentheses).

As you can see, aside from the '01 Lakers, the '04 Pistons, and the '06 Heat, usually the defensive rating of an NBA champion hovered around the 98-100 range. To be fair to the '01 Lakers, they "turned on" their switch in the Playoffs and dominated their competition en route to their second consecutive Title. So their Defensive Rating during the regular season is a bit deceiving.

It would be a mistake to dismiss the Magic as a Title contender, simply because the team's Defensive Rating falls in line with the Defensive Rating's of past NBA champions. The stats don't lie.

What's unfortunate for Orlando is that they are in the same conference with Boston & Cleveland, both teams off to historical paces record-wise. Many 'experts' aren't taking the Magic seriously because they don't believe it's possible Orlando can defeat both Boston AND Cleveland in a 7-game series. But they're missing the point, what the Celtics & Cavaliers are doing so far this season shouldn't invalidate the next sentence.

The Magic are a Title contender, the reality is that they'll just have a tough road to the Finals (Boston or Cleveland will have an equally tough road). It's foolish to presume Orlando can't defeat both Boston and Cleveland because as the Celtics' Kevin Garnett eloquently said last year after winning his first ring, "ANYTHING IS POSSIBLE!!!"