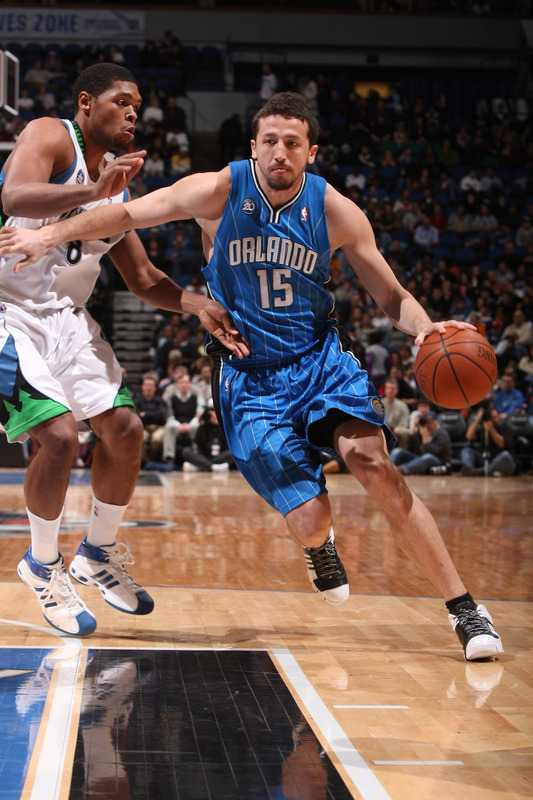 Hedo Turkoglu of the Orlando Magic drives past Ryan Gomes of the Minnesota Timberwolves during the Magic's 118-94 victory on December 27th, 2008

The nearly-NBA-elite Orlando Magic slumped in the second quarter against the cellar-dwelling Minnesota Timberwolves on Saturday night, but came alive in the fourth, outscoring Minnesota 39-20, to seal their NBA-best 7th straight victory. Hedo Turkoglu, Rashard Lewis, and Jameer Nelson combined for 70 points to offset the production of Minnesota's deep bench, which Rashad McCants led with 21 points.

The game followed a pattern that Magic fans should recognize. Orlando built an early lead against an inferior opponent, only to let it slip in the second quarter. After yielding more ground in the early part of the third quarter, they went on a huge run to swing the lead, not to mention the momentum, in their favor. Stingy fourth-quarter defense, coupled with hot shooting from at least one player, secured the win.

Let's fill in the blanks. The Magic lead, 17-2, early on and 31-22 at the end of the first quarter. Minnesota countered with its reserves in the second, as its bench players scored 20 of the team's 33 points in the period to take a 2-point lead into intermission. A Kevin Ollie free throw gave Minnesota a 61-55 lead in the third, but Orlando scored the game's next 14 points and wound up taking a 5-point lead in the final frame. The 'Wolves knotted the score at 82 thanks to a three-pointer from Rodney Carney--yes, he's a bench player--but Orlando's Marcin Gortat answered with a conventional three-point play to give the Magic the lead for good.

Rashard Lewis scored 12 of his 24 points in the third quarter, while Nelson added 12 of his 20 points and 4 of his game-high 8 assists in the fourth. The team's 39-point output in the period matched whe 'Wolves' entire output in the second half. The Magic's defense tightened up as their offense heated up, forcing 2 steals, 1 jump ball, and 2 shot-clock violations in that period.

To put it simply, there are very few teams in the NBA that will beat the Magic when Nelson, Lewis, and Turkoglu combine for 70 points. The 'Wolves fought valiantly, but they could not get over the hump with their star center, Al Jefferson, having as bad a night as he did. Orlando's Dwight Howard hounded him into a 16-point outing on 7-of-21 shooting.

Of course, Howard was no great shakes either. The Magic's All-Star center and franchise cornerstone made 7 of his 12 shots, but only mustered 17 points and 5 boards in 36 minutes. Turkoglu, Lewis, and Nelson each outrebounded Howard, who otherwise leads the league in rebounding and blocked shots. In the five games since returning to the lineup after missing two games with a sore knee, Howard is shooting 25-of-56 from the field for 72 points. The Magic's success with Howard out of the lineup and with his limited offensive production since returning proves that they don't necessarily need him to anchor the offense in order to win games.

As the Magic blew their early lead, it crossed my mind that they may have been looking forward to Monday's game against the Detroit Pistons, their first matchup against that team since it eliminated them from the playoffs last season. If they were, it didn't show when they remained focused enough re-grab the lead and close out the game tonight. As odd as it is to say on a night in which they trailed one of the league's worst teams in the second half, the Magic are really impressing me right now. This is a game that last year's squad might have blown.