Off-Day Open Thread: Where Do The Orlando Magic Stand?

Share All sharing options for: Off-Day Open Thread: Where Do The Orlando Magic Stand? 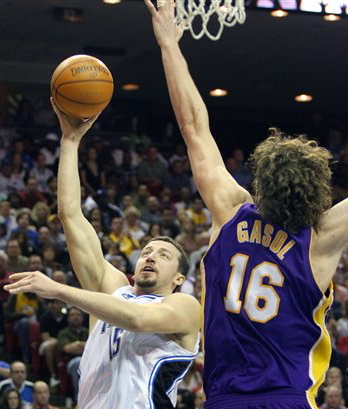 The battle deciding who's playing third fiddle to the Boston Celtics and Cleveland Cavaliers is still being fought.

With the Magic's recent flurry of home wins against West heavyweights (San Antonio Spurs, Los Angeles Lakers) this past week, it's worth checking out (in case anyone here has missed it) where the power rankings place Orlando and determine whether the critics are right or wrong.

Wanted to bump the Magic up to No. 3 after quality wins (at last) over the Blazers, Spurs and Lakers. If the Lakers weren't 10-3 against the rest of the top 15 -- closer than anyone to Boston's 9-1 -- we would have.

Is it too outlandish to say the top three teams in basketball might all be in the same conference?

The Magic are now within less than 0.1 of the Lakers in the current Power Rankings, and finish only one win behind L.A. in today's Playoff Odds , so certainly they have a case.

Another week, another whooping of the Western Conference. With victories against Golden State, San Antonio and the Lakers, Orlando improved to 11-4 against the West. That's a far cry from 2007-2008, when the Magic were only 14-16 in interconference games.

You could argue it away, say that this sort of production is the logical extension of what we saw in 2006-07, and that last year was a fluke. Hardly matters. Jameer Nelson (about 17 points and five assists) is killing it in only 32 minutes a night. Maybe Dick Vitale was right. I'd make a bad follow-up joke ("Nah..."), but it does burn a bit.

What are everyone's thoughts? Should the Magic be considered a top three team following a head-to-head victory over the Lake Show? If not, would a victory over the New Orleans Hornets tomorrow afternoon make a difference? Or .. does it matter where Orlando currently stands amongst the elite teams (the Spurs theory)?