This Year's Cavaliers and Celtics are Ahead of the 1995-96 Chicago Bulls' Pace; the Lakers Aren't Far Behind

Share All sharing options for: This Year's Cavaliers and Celtics are Ahead of the 1995-96 Chicago Bulls' Pace; the Lakers Aren't Far Behind

The Cleveland Cavaliers defeated the Denver Nuggets tonight, 105-88, for their 22nd win in 26 tries this season. The Cavs, along with the Boston Celtics and Los Angeles Lakers, are making a serious run at a 70-win season, and may challenge the 1995-96 Chicago Bulls' record 72-win season. ESPN.com's playoff odds feature, which uses a stat-driven (i.e. completely objective) formula devised by John Hollinger, lends credence to that claim.

Why? Because at this time during the 1995-96 season, the Bulls had outscored their opponents by 277 points, meaning the Cavs are well ahead of the curve. Additionally, the Celtics are slightly ahead of the Bulls' pace, and the Lakers are slightly behind. We see all this information in this chart of rolling point differential, which also includes data for the Orlando Magic for the purposes of this team-specific blog. Click the chart to view it larger and in a new window or tab. 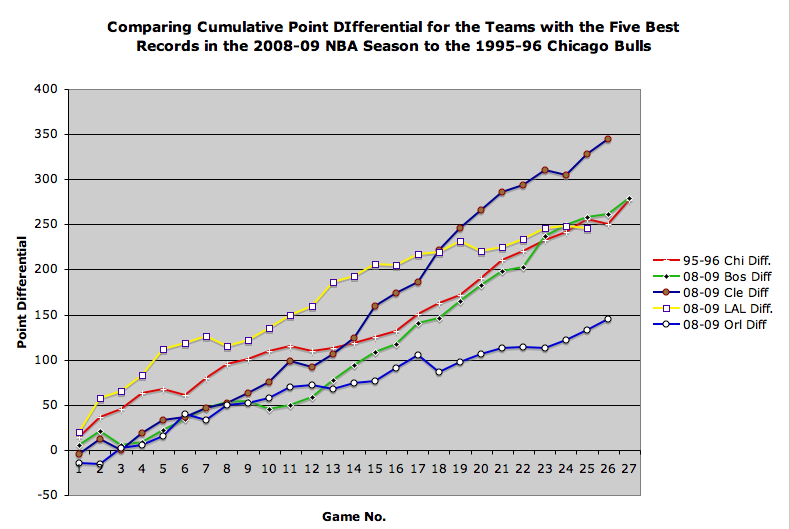 The obvious caveat here is that point differential doesn't adjust for strength of schedule, and that not every team has played the same amount of games. Then again, when teams routinely pummel their opponents, as the Cavs, Celtics, and Lakers do, "strength" of schedule becomes pretty moot. The Magic, widely regarded as the league's fourth-best team this season, are having a great season... but they do not stack up well against these other three teams, which speaks to just how otherworldly they've been.

However, as Bethlehem Shoals noted at The Sporting Blog a few days ago, any team hoping to enter the same hallowed realm as the 1995-96 Bulls is going to have to do more than merely win 72 games:

The 1995-96 Bulls, in addition to mining the buzz of MJ's comeback, already had three championships to their name. Pippen was a superstar in his own right, and Phil Jackson had become the first name in coaching genius. If ever there was a team destined, or at least groomed, to enjoy a dream season, it was this one. What's more, they were up against the 1971-1972 Lakers—not just their 69-13 record, but the likes of Wilt Chamberlain, Jerry West, Gail Goodrich, and even a few honorary games with Elgin Baylor before his early season retirement.

When it comes to this level of immortality, it can't just be about the bottom line.

Clearly, there's still a lot of basketball to be played this season. These teams will have some time to prove they have It, like the Bulls did, but it likely won't be enough. It's readily apparent that these three teams can, statistically speaking, join the Bulls at or near the top of the list of the most dominant teams in history.