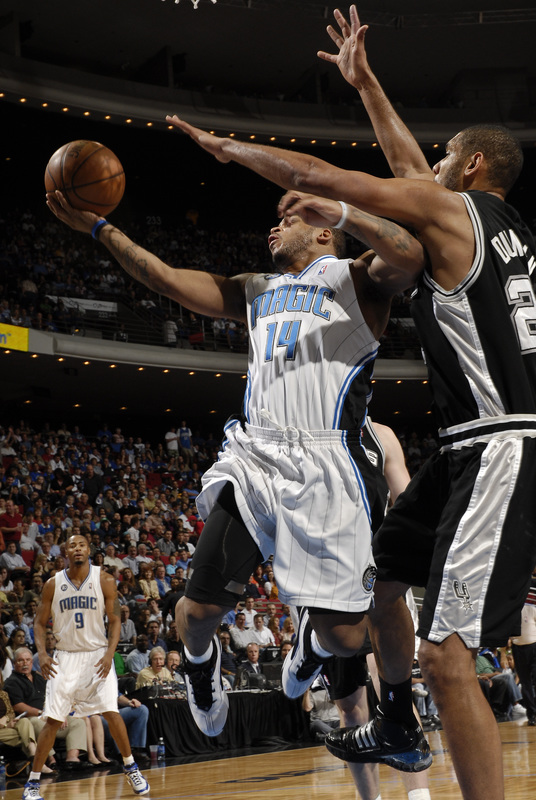 The Orlando Magic earned a victory over the San Antonio Spurs on Thursday night, 90-78, thanks in large part to Jameer Nelson's clutch play. Nelson led all scorers with 24 points, including 21 in the second half, as the Magic held off a late Spurs rally.

I should have seen this result coming.

The victory I might have predicted, but I had forgotten how much credit the Spurs have earned with the media over the years. Much will be made of Nelson's second-half brilliance, but just as much will be made of the Spurs' playing on the second night of a back-to-back, on the road, against a top-5 team. The Spurs weren't soundly beaten by the Magic; they were merely victims of a rough schedule. And they don't care about the regular season, anyway.

The schedule was not kind to the Spurs, the oldest team in the league with an average age of 29. San Antonio lost at New Orleans on Wednesday night, and the Magic came out looking to run on the weary Spurs.

''Orlando will have something in its schedule where they'll have a god-awful back-to-back. It evens out in the end.''

I don't mean to deny that the Spurs' playing New Orleans last night was a factor. Plenty of their shots came up short tonight... just like they did last night, when they had two days of rest. But it is, frankly, unfair to the winning team to attribute its victory to its opponents' schedule.

In a way, it's fitting that Nelson led the Magic tonight. He plays with a tremendous chip on his shoulder, perhaps moreso than any other Magic player. His spirit really drives this team. Not many people gave him a chance to best Tony Parker tonight, just as not many people will give Orlando a chance to win in May or June. It's frustrating.

Enough with the meta-narrative. Let's talk about the actual game after the jump.

Orlando looked like it was headed for an embarrassing loss after stumbling out of the gate. It fell behind, 9-3, and could not get into an offensive rhythm. The Spurs weren't much more precise, but they seemed calmer and ready to grind out an ugly game if they had to. Dwight Howard and Keith Bogans got the Magic's offense going by scoring the first 9 points in a 12-0 Orlando run; Courtney Lee made the final basket during the spurt, a three-pointer in the corner, thanks to the spacing Howard's and Bogans' baskets created.

For most of the rest of the game, Orlando was comfortably ahead. Manu Ginobili and Tony Parker came up short on most of their jumpers. Ginobili's forays to the rim were even more animated than usual, as Bogans' on-ball defense made things uncomfortable for the Argentinean; Howard's presence in the paint behind him certainly complicated the issue, too. When the Spurs dumped the ball inside to Tim Duncan, their veteran franchise center, Howard defended him well by keeping both arms straight up and, yes, by giving him a few extracurricular bumps. Duncan was at his best when he caught the ball facing the basket, after which point he could simply spot-up for that bank shot he loves so much. Howard is still reluctant to leave the paint to guard shooters, even ones as lethal as Duncan.

At the other end, it was fairly obvious that Howard had not played in more than a week. He missed several gimmes at the rim, ones he might usually dunk, and was bothered by Duncan's physicality. In another indication of Howard's maturity as a player, he did not let Duncan's bumping, grinding, and hacking throw him off his game; he simply dealt it back on the other end while trying to be more patient on offense. And yes, I am aware that Howard barks at the officials every time he believes they missed a call, which is not necessarily the mark of a "mature" player. But in years past, Howard would bark at officials and sulk his way ineffectively through entire games if opponents rattled him enough early, which is why I say he has matured. Kind of.

Howard's rust also showed in his rebounding performance. Although he still finished with a game-high of 14 boards, he missed several others he would typically grab because he mis-timed his jumps. He also fumbled a few away, but that's to be expected against a Spurs team that has quick-handed guards like Ginobili and Roger Mason.

Meanwhile, Nelson continued to do what he's done the entire year. Tonight, he just did it better and more often. Jameer drove to the basket frequently enough to put the defense on-notice, but more often pulled-up for jumpers after his defender went under a screen. Once he made a few of those shots in a row, he completely forgot about passing the ball and instead tried to create for himself off the dribble. It worked. He's playing the best basketball of his career and he's going to take this team places, especially on nights when Hedo Turkoglu (5-of-12 for 11 points) and Rashard Lewis (5-of-15 for 15 points) can't find the range.

The Magic have tomorrow off before facing the Lakers on Saturday.