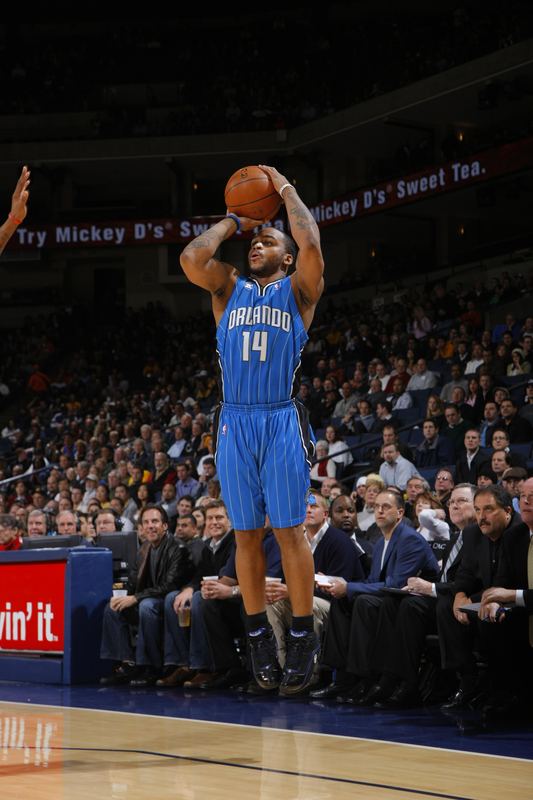 Jameer Nelson of the Orlando Magic shoots against the Golden State Warriors on Monday night. The Magic won, 109-98, thaks in large part to Nelson's 32 points

Golden State of Mind, SB Nation's Warriors blog, predicted before tonight's game that Jameer Nelson would "embarrass" the Dubs. They also predicted the Warriors would win by a single point. One of those predictions came true, and it was the one that favored the Magic. Nelson tied a career-high with 32 points and helped the Magic overcome another poor shooting performance by Hedo Turkoglu and close a five-game Western road trip with a 4-1 record.

By and large the Warriors struggled offensively. Stephen Jackson, Jamal Crawford, and Kelenna Azubuike combined to shoot 11-of-45 for 34 points. If they ran a single play the entire game, I didn't see it. They were content to try to take their man off the dribble, which worked to the Magic's advantage. Orlando encountered trouble when the Warriors were able to get by their first man. The initial rotation to the balhandler on his way to the hoop was good enough, but often there wasn't another rotation to take away the offensive rebound. Although the Magic held a slight advantage in total offensive rebound percentage, they still allowed the Warriors--and Andris Biedrins in particular--too many second chances. On another night, the Warriors may have been able to make Orlando pay. Tonight, though, their shots did not drop, and Orlando got the victory.

The Magic's offense wasn't too impressive; their high efficiency is more a reflection of Golden State's laughably bad defense than their own actual ability. Take, for instance, a late first-half fast break in which Keith Bogans received the ball on the left wing. I clamored for him to shoot the open three-pointer, but he instead drove into traffic. The Warriors' C.J. Watson was in perfect position to slide over and cut off KeBo's penetration, but when Keith got close enough, Watson ran the other way instead. Bogans thus got a layup the likes of which are usually only seen in pre-game warmups.

Marcin Gortat had another fine game for Orlando and tallied 16 points, 13 rebounds (7 offensive), and 3 blocks in his second career start. His touch around the basket could use some work, but overall he's shown that he belongs in this team's rotation. Perhaps Tony Battie, who had a horrendous offensive game with 1-of-8 shooting, could slide to the backup power forward slot to make room for Gortat as Dwight Howard's primary backup. Gortat doesn't make too many mistakes on either end, and actually showed some passing acumen when he essentially deflected a Hedo Turkoglu pass away from him and toward a wide-open Nelson in the right corner for one of Jameer's five three-pointers.

Nelson really was something else. He scored 15 points in the third quarter to hold off a bit of a Warriors rally. His passing numbers (4 turnovers, 3 assists) aren't impressive at all, but tonight Jameer was definitely looking for his own shot. You can't fault him for that, as he was absolutely feeling it. Every Magic player could have used a few more free throw attempts, but it's awfully hard to draw fouls when there aren't any defenders in the area to actually, you know, foul you. I hope I've made it clear just how bad Golden State's defense was.

Of course, Stan Van Gundy can't be too happy with his team's defensive performance, either. Marco Belinelli, one of those Summer-League Superstars whose skills have not translated to the NBA, joined Nelson in setting a career-high tonight. Belinelli was perhaps the only Warrior looking to set-up his teammates--he tied Crawford for the team lead in assists, with 6--and looked like the next Manu Ginobili, even against Courtney Lee, usually a defensive stickler. The Warriors' 58 second-half points, and the second-chance opportunities they enjoyed, will certainly make the game film.

Lee, for his part, was simply outstanding on offense. He shot 6-of-8 from the field, making both of his three-pointers, on his way to 16 points. He looks much more confident in his ability to create off the dribble, and his pull-up jumpers from the foul line have become very close to automatic. We should consider ourselves lucky to see such a talented, intelligent player start to "get it" in front of our very eyes. I'm not ready to call him a future superstar or anything, but right now, this draft pick looks like a real winner.

Anyway, it's nice to see the Magic go 4-1 on the road trip, especially since they had to play the final two-and-a-half games without Dwight Howard. Let's hope his knee is well rested for Thursday's nationally televised tilt with Tim Duncan and the surging San Antonio Spurs.