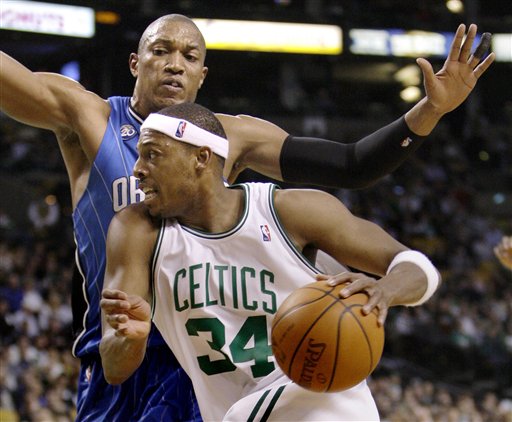 Nothing to see here, folks. Just move along. The Boston Celtics rolled to a 107-88 victory over the Orlando Magic thanks to the stellar third-quarter play of Paul Pierce, who scored 17 of his 24 points in the period, and to suffocating defense throughout. Injury-depleted Orlando challenged near the end of the first half, but ultimately had neither the firepower nor the personnel--coach Stan Van Gundy only used two reserves the entire game--to mount a serious challenge in the second half.

There are a few reasons for Magic fans to panic, but let's not lose perspective here: Orlando hung with Boston for some of the game despite the fact that it was missing its three best guards. We'll get a better idea of what Orlando's made of when it's healthy, which may not be for a while now. January 22nd is the next meeting between these two teams. Let's hope both sides are healthy for that one. Before accusing me of homerism, please not that CelticsBlog, the web's foremost destination for Celtics fans and a proud member of SB Nation, agrees:

Honestly, with the Magic starting a backcourt of Anthony Johnson and JJ Redick, the Celtics absolutely should have won as they did. This is an unfair test of the Magic - we'll see what they've got in Orlando in the new year.

More on the game, including why Otis Smith needs to start working the phones, after the jump.

The biggest worry for Orlando is point guard play. Tout Anthony Johnson's 3.47-to-1 assist-to-turnover ratio all you want, but the man can't shoot straight (35.4% on the season after tonight's game). Crudely, a missed shot is usually about the same as a turnover, since most missed shots are rebounded by the defensive team. A.J. shot 2-of-11 in 30 minutes tonight; his backcourt-mate, J.J. Redick, shot 2-of-5 in 31 minutes. Redick needs to shoot more often, and Johnson needs to shoot approximately never. The boxscore may lead you to believe that Johnson's shot attempts were the result of his being left open. Sure, he was open on a lot of them... but so were other players. Correct me if I'm wrong, but wasn't Rashard Lewis wide-the-eff-open in the left corner, maybe 8 feet to Johnson's left, just before Johnson uncorked one of his three errant three-pointers? Orlando GM Otis Smith is preaching patience regarding personnel moves, although in that specific quote he was probably referring to shooting guards, but it's blindingly obvious that the Magic can't afford to rely on Johnson. He's 34 years old and has played more than 14000 minutes in his NBA career. He's not going to change his game. It's time for Smith and Van Gundy to weigh their options to find a viable replacement. Like, yesterday. Of course, doing so would tacitly admit that signing Johnson to a two-year deal--next season is a player option--for more than the veteran's minimum was a bad decision. So, uh, don't hold your breath on that front.

And before laying into Van Gundy for using such a short rotation, consider that he didn't have any viable options. Brian Cook? Can't defend. Adonal Foyle? Can defend--in fact, that's all he can do--but his talents are wasted against the likes of Kendrick Perkins and Glen Davis. Marcin Gortat? Can defend, but not Kevin Garnett. Jeremy Richardson? As a training-camp invitee only activated because of the injuries, he'd be overmatched against the World Champions in meaningful minutes. Coaching is not the issue; personnel is.

What Stan can do, and in fact needs to do before these teams next meet, is figure a way to get Dwight Howard going against brutish centers like Boston's Kendrick Perkins. The Beast refused to let Howard set up shop on either block, forcing Dwight to take a few awful bank shots and sweeping 14-foot hooks while fading away. The result was a below-average offensive night for Dwight: 14 points on 5-of-12 shooting in 43 minutes. That's great defense, and the return of Jameer Nelson, Mickael Pietrus, and Keith Bogans isn't going to change Perkins' physical nature.

Overall, Orlando fared about as well as could be realistically expected. I liked that they seemed quicker to a lot of loose balls, especially in the first half, and did not lose their composure until late in the game when it became apparent that playing the remaining minutes was a mere formality. Gunner extraordinaire Eddie House won't pop-off for 11 points on 4-of-5 shooting in just 15 minutes every night, and the Magic won't go with a 7-man rotation every night. Rookie Courtney Lee defended Ray Allen well, for the most part, but it was just Allen's night. Lee didn't give Allen any daylight the first time they were matched up together and forced him to shoot a long, contested three-pointer after taking some fancy dribbles. Sure, he made it, but how else was Lee going to defend him?

Rashard Lewis' first regular-season 30-point effort of his Magic career is appreciated, as is the candor he showed when he justly argued that he was bumped by Leon Powe while operating on the left block. I like seeing Lew engaged; I don't like seeing him short-rim technical free throws, as he did on one occasion tonight, but the level of engagement he showed is promising.

Orlando has two more games at home this week before embarking on a grueling West Coast road trip that will surely test their mettle. Don't dwell on this loss too much, if at all. There isn't much to learn from it.