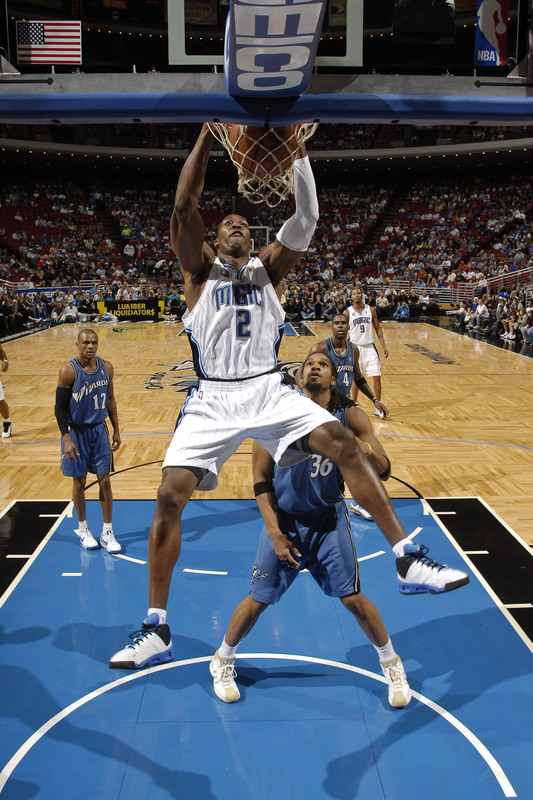 Orlando Magic center Dwight Howard dunks for 2 of his 31 points against the Washington Wizards in Orlando's 106-81 victory.

The Orlando Magic executed their game-plan to perfection Saturday night in defeating the Washington Wizards, 106-81, for their fourth straight victory. In the first half, they used the three-point shot to space the floor for Dwight Howard. Keith Bogans, Mickael Pietrus, and Hedo Turkoglu hit two three-pointers apiece in the first half, after which the Magic lead, 58-39. In the second half, with the three-balls not dropping, they turned to Dwight Howard. The franchise center scored 21 of his season-high 31 points in the second half, shooting 7-of-8 from the field and 7-of-10 from the foul line during that stretch.

The Wizards never lead in the game, nor did they threaten. For the second straight night, they let their opponent shoot--and make--uncontested three-pointers on their first two possessions. I don't necessarily blame them for putting a stamp on this one and mailing it in. Caron Butler busted his butt in his 24 minutes, and even played the first 7 of the third quarter despite getting a knot on his noggin after colliding with Mickael Pietrus. They don't call him Tuff Juice for nothin', apparently.

Orlando got a relatively enormous 35 points from its bench, lead by Bogans, who finished with 13. Rookie shooting guard Courtney Lee, inserted by coach Stan Van Gundy for the explicit purpose of defending Wizards second-year guard Nick Young, scored 6 points. Anthony Johnson and Tony Battie had 8 points each. The surprising bench output mitigated the off-nights Hedo Turkoglu and Rashard Lewis had; the Magic's All-Star-caliber forwards were off the mark, combining to shoot 6-of-23 from the field for 16 points. The Magic will not usually be able to win when those two have synchronous bad games. In fact, if they duplicate that performance Monday night against Portland, they're likely headed for a double-digit defeat.

The forwards' bad night was about the only spot of concern for Orlando. Jameer Nelson shot poorly but infrequently, preferring instead to facilitate. As a result, he finished with 6 assists and 0 turnovers. Certainly they'd like Lee to fare a bit better on defense, as Young scored 20 points, but it's at least encouraging that Stan trusts him enough to give him a specific defensive assignment, albeit against a second-year player. Maybe Lee was distracted, though. John Denton reports his home was robbed last Saturday, while the Magic were playing the Sacramento Kings, and he is in the process of moving to a more secure community.

J.J. Redick, Marcin Gortat, and Brian Cook dusted themselves off and entered the game with about 3 minutes to play. Neither player took a shot, which disappointed Magic color analyst Richie Adubato, who bet Dennis Neumann a coffee that Cook would attempt a shot before Redick did. So J.J. is still 0-for-8 from the field in 4 games, and has dropped from 6th man to 10th man, but he played well in extremely limited time: 2 rebounds and 1 assist. We'll take it.

As mentioned, the Magic's next game is Monday night against the Portland Trail Blazers; it's their last at home before embarking on a three-game road trip. Orlando has a chance to protect its home floor once again for its fifth straight victory. Let's hope the Magic don't squander it.