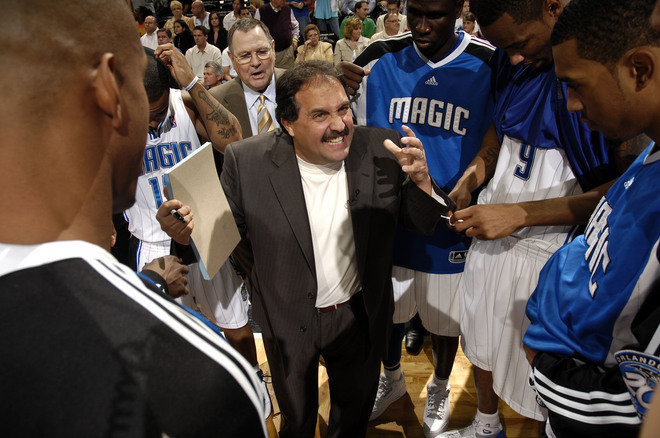 Orlando Magic coach Stan Van Gundy talks to his team during a timeout. Van Gundy has been reluctant to play his reserves so far this season.

Forgive me, but I'm about to quote something I wrote in last night's recap. Seems a bit daffy, but it has a point:

[Philadelphia] [c]oach Maurice Cheeks emptied his bench last night, playing all 12 men in uniform. Not a good strategy for a team now in a 2-4 hole and in bad need of cohesion.

In contrast, [Magic coach Stan] Van Gundy played a tight eight-man rotation, and the Magic had the look of a team nearly in mid-season form.

There's another way of looking at Stan's decision to only play Tony Battie, Keith Bogans, and Anthony Johnson off the bench last night. For instance, John Denton thinks it's dangerous to play an eight-man rotation in early November, especially when there are young players on the bench who need minutes to develop:

[J.J.] Redick got off to a slow start, got yanked from the rotation and it may be weeks before he plays meaningful minutes again. Even considering the depths of the past two seasons, his confidence is likely teetering on the brink.

[Courtney] Lee, the rookie who showed flashes of greatness in the preseason, has failed to get into four of the Magic's five games. The one game that he did play his jump shot was a mess admittedly because he had no rhythm from having played.

[Marcin] Gortat hasn't seen the floor since a forgettable 6-minute stint in the opener against Atlanta. He could have played at the start of Thursday's second quarter when Battie was winded, but instead Howard returned with two fouls. He soon picked up his third, sending a brief scare through Amway Arena.

As for [Brian] Cook, who has yet to play, he said he was sick and tired of the Magic's reasons as to why he hasn't gotten into a game yet. I find it very bizarre that he hasn't played considering how Orlando has struggled to score and shoot the ball from 3-point range so far. Clearly, Cook is on the trade block.

UPDATE: Brian Schmitz says J.J. was held out of last night's game with an injured left leg he suffered in pre-game warmups. It's unclear if he would have played if he were healthy, but his health is something to consider when evaluating Stan's rotation last night.

It's entirely possible, of course, that Stan just wanted to play the best possible lineup for his team's first nationally televised game of the season; Brian Schmitz notes that the entire team played with more energy than usual. But it's equally possible that he doesn't plan to play more than eight guys each night, in which case the Magic are going to be in a bit of trouble, say, next season, when they won't be able to rely on Bogans to play the swing positions off the bench. What of Redick and Lee then?

So, here's today's topic: how should Stan allocate minutes? Consider these questions in your response: Can the Magic afford to keep Redick and Lee glued to the bench? What about Gortat? Do Cook and his three-point shooting have a place in this rotation? Can the Magic succeed in the playoffs--assuming they make it there--while continuing to play Hedo Turkoglu, Rashard Lewis, and Dwight Howard 37-plus minutes per game? And, in a somewhat different vein... do the Magic need to pursue an impact-level free agent? Antonio McDyess will be available soon, and the Magic could try to clear cap space--an obstacle for any transaction at this point--to sign him.

Final note: Trevor Ariza is killing it with the L.A. Lakers. We miss you, good buddy.