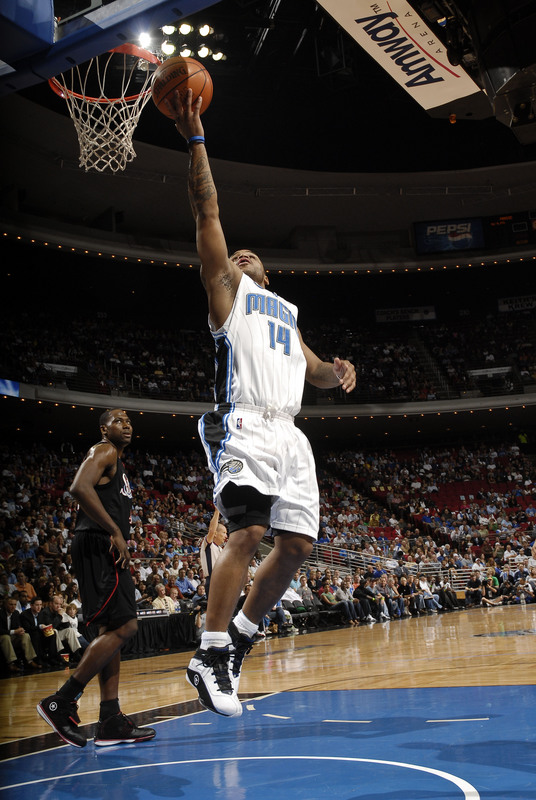 3QC commenter "magic fanatic" might have said it best in the GameThread:

We were 2-2 going into tonight, this sins of the seasons start were washed on national tv. Big win against the best team we've seen so far. The season has begun.

Indeed, the Orlando Magic put together their first solid game of the young NBA season Thursday night when they sent an upstart Philadelphia 76ers team reeling, 98-88, to drop them to 2-4. And they did it despite Dwight Howard's being in foul trouble and, consequently, Philadelphia's commanding 54-46 edge on the boards.

For the most part, the Magic played under control. A few days ago, Brian Schmitz quoted coach Stan Van Gundy as saying, "We aren't playing our game." Tonight, they played it. They took their share of three-balls (25 out of 82 field goal attempts overall), limited their turnovers (10), and forced Philadelphia to take contested jumpers. Credit point guard Jameer Nelson for leading the way for Orlando. He finished with 16 points, 9 assists, and 3 turnovers. Some of the turnovers were downright silly--dribbling off his knee in traffic, for instance--but his solid defense (!) and sound decision-making (!!) made up for it. Perhaps no play better showcased Jameer's headiness than the one near the end of the first half when he, anticipating the 76ers' taking a foul, threw the ball at the rim as Philadelphia guard Willie Green wrapped him up. He was in three-point territory, which earned him three free throws, all of which he sunk. I love seeing that sort of awareness on the part of our franchise point guard, especially when his backup, the usually steady Anthony Johnson, looks so lost. Perhaps befuddled by the quicker Louis Williams, Johnson threw bad passes, missed both his shots badly, and finished with a plus/minus of -10 in a little over 12 minutes.

Not to be outdone, 76ers staring point guard Andre Miller played what may have been one of the worst games of his recent career. He missed 17 of his 24 shots en route to finishing with 15 points and 2 assists. He failed to exploit his size advantage over Nelson, hogged the ball, and was a sieve on defense. Okay, he spent the previous night chasing Dwyane Wade and Mario Chalmers around in Miami, maybe he was tired. But dude's a 10-year vet who should know when to give up the rock. Oh, and he's in a contract year. Yikes.

Comparisons between the 76ers of this year and the Magic of last year tend to be a little overblown. Sure, both teams signed premier forwards from Western Conference teams after 40-42 seasons, but that's about it. When the Magic signed Rashard Lewis, it was to further their existing plan to surround Howard with three-point shooters. When the 76ers signed Brand, it was because he was the best player available. "Sign first, develop offensive philosophy later," I suppose. Don't get me wrong, getting Brand was a coup for the 76ers, who did not figure to be huge players in the summer's free-agency period, but they've done a poor job integrating him into the offense. Philadelphia has no idea what it wants to do on offense. It'll figure it out eventually, but for right now, it's going to play a number of combinations of guys and see what works. Coach Maurice Cheeks emptied his bench last night, playing all 12 men in uniform. Not a good strategy for a team now in a 2-4 hole and in bad need of cohesion.

In contrast, Van Gundy played a tight eight-man rotation, and the Magic had the look of a team nearly in mid-season form. They executed their offense crisply, got the shots they wanted, and remained aggressive. Okay, Hedo Turkoglu took some ill-advised shots, including a no-look, left-handed, running scoop shot in traffic, but he was driving-and-kicking as well as anyone else, and tied with Lewis for the game-high in scoring with 20. The weak-side defense could use some work; Howard routinely left his man, usually Samuel Dalembert, open so he could pursue weak-side blocks. If he whiffed, Dalembert was able to get to the offensive boards--or, at least twice, to catch a lob and finish with a dunk--because none of Howard's teammates rotated down to box him out. But, again, it's only 5 games into the season, and I'm sure the Magic will get it down eventually.

I really should single-out the solid play of Tony Battie in this game. The Magic needed him to deliver, given Howard's foul trouble, and deliver he did. His defense on Brand is a big reason why the 76ers' franchise forward struggled to get it going offensively. Battie, never known as fleet-of-foot, nevertheless worked hard to stay with Brand in transition; what's more, he made sure to body him up strong, not letting him get good position in the post, and generally frustrating him. And, as another aside, Nelson was tremendous. There's absolutely no reason why he can't play this aggressively each night. I can tolerate some of his turnovers as long as they're borne of aggression instead of, say, laziness.

If there's one big cause for concern tonight, it was that the Magic once again let a fairly large lead slip away. The third-quarter lead ballooned to 24 points before Philadelphia scrapped its way back into the game. But ultimately, its poor shooting and ball movement, coupled with Orlando's offensive precision, undid it. A job well done to Orlando, which has Friday off before welcoming the slumping Washington Wizards to town Saturday.