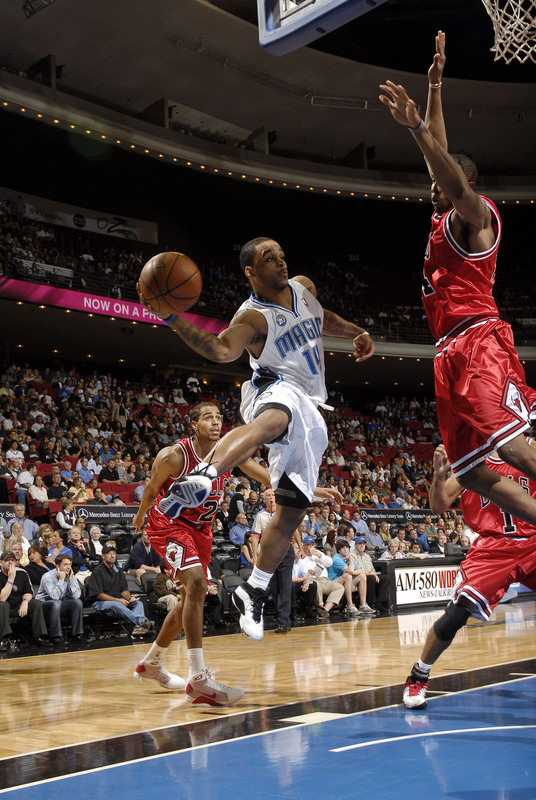 Jameer Nelson of the Orlando Magic jumps to pass around Tyrus Thomas of the Chicago Bulls in Orlando's 96-93 victory over Chicago on Monday night.

What will it take to wake the Orlando Magic up?

They beat the Chicago Bulls, 96-93, to pull their record to .500 last night, but they once again played poorly, owing their victory to Chicago's ineptitude more than anything else. Stan Van Gundy's team committed 7 turnovers in the final quarter, watching what had been a 17-point lead disappear against a team that, even with a brand-new coach, still doesn't play its best lineup enough.

Nobody was immune to Van Gundy's postgame barbs, as Brian Schmitz explains. He called out Jameer Nelson for turning the ball over; Mickael Pietrus for committing too many fouls; Hedo Turkoglu for turning the ball over and for taking bad shots; Rashard Lewis for defensive lapses; and Dwight Howard for missing free throws. Make no mistake, this wasn't a case of a coach picking nits after a victory to appear humble: he has legitimate concerns. And so should we.

The team took too many three-pointers. Dwight Howard still can't hit his free throws. Hedo Turkoglu and Jameer Nelson still haven't played a good game. Mickael Pietrus, when he hasn't been in foul trouble, isn't defending or rebounding to the best of his ability. There aren't any answers to be found on the bench, although Keith Bogans' 7 first-quarter points last night in relief of Pietrus were a pleasant surprise. Through the first week of the NBA season, Orlando's been the league's biggest disappointment, and save for an impressive 17-1 run in the third period last night, there haven't been any signs that this team will improve.

At least Rashard Lewis and Dwight Howard showed up on the glass last night. Their 25 combined rebounds, 9 on the offensive end, should make up for their miscues last night: Howard's 4-of-11 foul shooting, Lewis' 2-of-9 three-point shooting, and Lewis' fouling Andres Nocioni on a desperation three-pointer with the Magic holding a four-point lead and 4 seconds to play.

The Magic take the court again Thursday night against Philadelphia, the first truly great team they've played yet. Unless they pull it together in practice this week, they're likely to end up losing yet again.