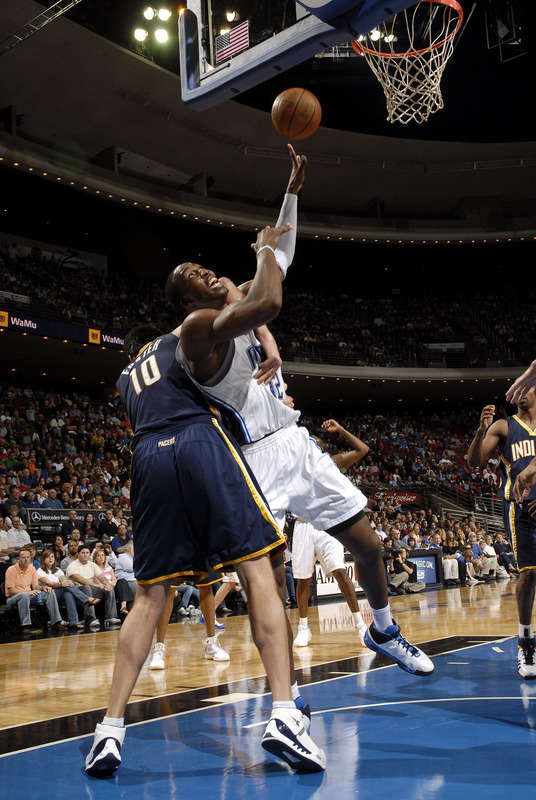 Jeff Foster of the Indiana Pacers has no choice but to foul Dwight Howard of the Orlando Magic as Howard gains inside position. Orlando's star center tallied season-highs in points (32) and rebounds (21) as the Magic cruised to a 110-96 victory.

The Orlando Magic defended their home floor against the Indiana Pacers, blowing them out by a score of 110-96, to finish the month with a 13-2 record. Dwight Howard and Anthony Johnson got the offense going early, Hedo Turkoglu and Rashard Lewis kept it going later, and the Magic staved off a late Pacers rally.

It's frustrating to watch the games lately and come away with so little to say about them. I suppose the best thing we've seen from this team is that its forming an identity. They play swarming defense on one end and dump the ball in to their franchise center on the other end. Howard has picked defenses clean lately, and appears to have refined his post game ever so slightly. His dominance, as well as the contributions from Hedo Turkoglu and Rashard Lewis on the wings, has lead to Orlando looking much sharper offensively than it did earlier in the season. That the Magic have improved without Jameer Nelson, their starting point guard, available says a lot about where this team might be headed if it stays on its present course.

What's most encouraging about this game from Orlando's perspective is the play of rookie shooting guard Courtney Lee. Already expected to take on a bigger role when Keith Bogans injured his thumb last week, Lee's role expanded even more when the team learned today Mickael Pietrus would miss at least 3 weeks with a thumb injury of his own. Although Lee did not shoot well today--only 1-of-4--he played his best offensive game overall by moving the ball quickly and decisively. Tonight, he tallied several "hockey assists" and appeared much more comfortable in his role. Although he's not quite ready to take the starting job from J.J. Redick--who struggled with 4 points on 1-of-4 shooting and 3 turnovers tonight--Lee looks like he won't hurt the Magic as much as I thought he might. A backhanded compliment is still a compliment.

Orlando heads back into action Monday night in Boston for its first game against a title-contender this season, unless one counts Houston as a contender, of course. Wonder if coach Stan Van Gundy will open his rotation just a bit; tonight, he played only 8 men, and one of them (Brian Cook) played just 5 minutes.