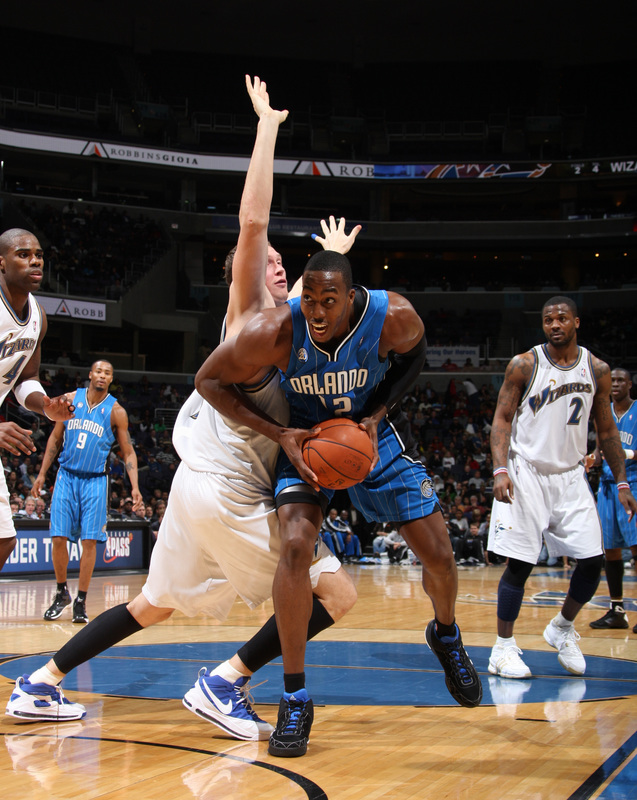 Dwight Howard of the Orlando Magic works around the defense of Darius Songaila of the Washington Wizards on November 27th, 2008. Howard scored 26 points in Orlando's 105-90 route of the Wizards.

For 42 minutes on Thanksgiving Night, the Orlando Magic played tough, intelligent basketball against an injury-depleted Washington Wizards team. The result was a convincing 105-90 victory on the road--the Magic's sixth straight win away from Amway Arena--on the second night of a back-to-back set. Not a bad way to end a holiday at all.

Dwight Howard paced Orlando with 26 points, 14 rebounds, and 3 blocked shots. At one point midway through the first quarter, Howard had matched the Wizards in points and rebounds. He dominated the first quarter and kept Washington from getting into a groove offensively; not only did his defense deter would-be drivers from going to the basket, but his ability to draw fouls forced the Wizards to shuffle their lineup more than they wanted to. JaVale McGee and Andray Blatche were each whistled for 2 fouls in the opening period. Etan Thomas, the third-string center, was called for another. Howard had little trouble imposing his will on the game. Caron Butler scored 13 of his 25 points in the period to keep the Wizards within striking distance, but he appeared to run out of energy as the game wore on. He needed help that no other Wizard, not even fellow All-Star Antawn Jamison, could provide.

But what of the six minutes when Orlando didn't play well? With Tony Battie and J.J. Redick in the game for Hedo Turkoglu and Rashard Lewis at the beginning of the second quarter, the Wizards scored a quick 9 points and Orlando appeared ready to once again squander a substantial lead. The Magic soon regained their focus--except Redick, who bumbled his way to 7 points on 3-of-9 shooting go go with 3 turnovers--and wrested control away from the Wizards, then cruised to victory. Washington's offense could not get any good looks, which is something that can't be blamed on interim head coach Ed Tapscott, who is running the same methodical Princeton offense this team used under his predecessor, Eddie Jordan. Orlando simply had an answer for everything Washington did, while Washington did not have the personnel to respond to Howard down low. Sorry if that sounds overly simplistic, but it's true. Even when Howard was double-teamed, he was able to beat it or pass out of it. Whichever Magic player whose man left him to double Howard--usually Mickael Pietrus--made himself visible and cut to the basket for an easy two points.

The highlight of the game may have been Jameer Nelson's attire on the sidelines. Nelson wore a white-collared pink shirt with a sharp pink tie. Bravo.

For more on the game, read Bullets Forever's brief recap, the GameFlow from PopcornMachine, and the Game Notes from Hoops Addict. Hope you enjoyed your Thanksgiving.