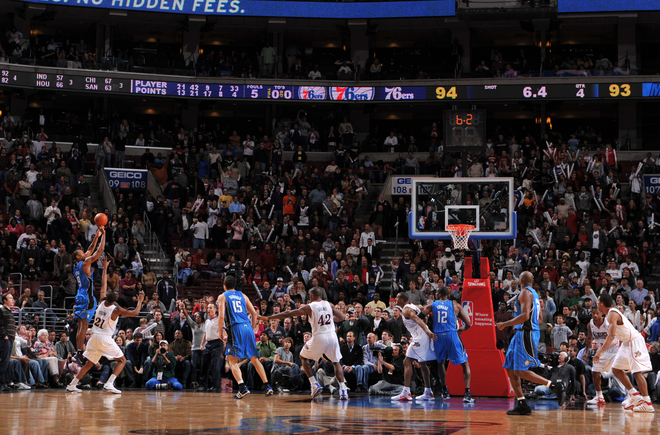 The Orlando Magic overcame poor shooting in the second half, poor offensive rebounding throughout, and Elton Brand's magnificence to defeat the Philadelphia 76ers on Wednesday night, 96-94. Dwight Howard led Orlando with 21 points and 14 rebounds; Rashard Lewis added 19 points and the game-winning jumper (depicted above); and Tony Battie scored 20 points on 9-of-9 shooting off the bench for Orlando, his highest-scoring game as a Magic player and the second-highest scoring game of his 11-year career.

The game-winner was Lewis' second this week, and came off a high screen-and-roll between Howard and the Magic's top ballhandler--Hedo Turkoglu today, Jameer Nelson previously--as it did last week against the Pacers. As Turkoglu dribbled left around Howard's screen, Lewis' man left him open in the corner to help defend Turkoglu. Turk kicked it out to Lewis, who made the shot. Leaving Lewis open in the left corner is a bad idea on any night, but especially on one in which he made 4 of his previous 9 tries. Here's what Magic coach Stan Van Gundy said of the play, courtesy of the Associated Press (via Yahoo! Sports):

"It was a set play to a point. We wanted to get the ball in Lewis' hands and he made a play. I'm not taking credit for that. The credit goes to Turkoglu and Rashard Lewis."

This game says more about Philadelphia than it does about the Magic. The 76ers, on their home floor and with momentum, had an opportunity to beat a team missing its top point guard and its top reserve. Their coach, Maurice Cheeks, exhausted their supply of timeouts, leaving them to improvise trailing by 2 with 4.7 seconds with which to work. Andre Miller, a 10-year veteran hoping to earn a contract extension, dribbled upcourt and uncorked a 40-footer with 3 seconds left. He shot so early that there were still a few tenths of a second remaining after the ball clanked off the rim and out of bounds. Liberty Ballers, SB Nation's 76ers blog, has the screengrab. The shot looks even worse than I've described it, if you can believe it.

Orlando led the entire first half and looked well on its way to an easy win before letting Philadelphia back in the game. The Magic shot 12-of-34 in the second half, largely due to poor ball movement. Or, when the ball did move, it went to the hands of a 76er. In the halfcourt, Philadelphia was able to get the ball to Brand in his preferred spots along the baseline and at the elbows for jumpers. It was Andre Iguodala, a potential All-Star in the making, who did the 76ers in. He missed plenty of open looks, and even a few contested-yet-not-impossible layups, which kept Philadelphia from seizing control for good.

Despite Howard's usual dominance on the glass and unusually good free throw shooting--he went 13-of-18 at the stripe--and Lewis' heroics, it was Battie who may have proven to be Orlando's MVP on the night. His perfect shooting saved plays that appeared to be doomed. He played the role of the lightly-regarded fullback who squeaks free and makes a key catch just as his quarterback runs out of options. J.J. Redick was no slouch off the bench either, scoring 7 points on 2-of-3 shooting in 20 minutes.

The most important number in this game may 23... as in 23.1%, what Orlando point guards Anthony Johnson and Courtney Lee combined to shoot. Neither player took many bad shots, and Johnson nailed a key three-pointer down the stretch, but the Magic won't win many games when their point guards aren't keeping defenses honest.