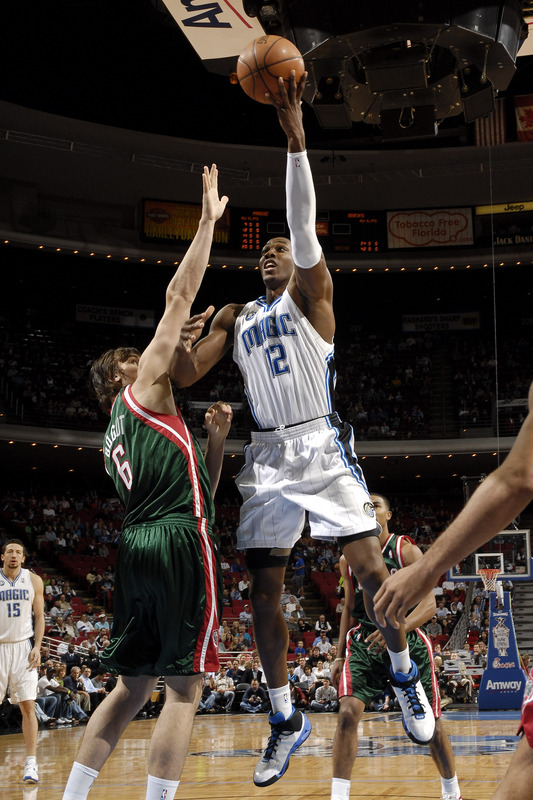 The Orlando Magic's starting frontcourt of Hedo Turkoglu, Rashard Lewis, and Dwight Howard combined to score 68 points as Orlando held off the Milwaukee Bucks' late rally to win, 108-101. The Bucks were content to send the Magic, specifically Howard, to the line all night, resulting in a season-high 54 free throw attempts for the Magic. It also resulted in a long, sloppy game--2 hours and 31 minutes of missed free-throws and Tyronn Lue over-dribbling--that's probably best forgotten. Here's BrewHoop's recap of the game from the Bucks' perspective.

Arguably the biggest issue for the Magic isn't the final score; it's that starting point guard Jameer Nelson left the game in the second period and returned only briefly in the third period due to a groin strain; he's day-to-day. With Nelson out tonight, Anthony Johnson took over the point guard duties, with Hedo Turkoglu playing point-forward with J.J. Redick and Courtney Lee in the backcourt during some sets. Nelson played well before leaving (8 points, 6 assists, 0 turnovers in 17 minutes) and the Magic cannot afford for him to miss much time. A Johnson/Turkoglu rotation is certainly less than ideal.

Also less than ideal is the Magic's inability to figuratively shut the door on teams once they get a big lead; they held a 13-point advantage over Milwaukee early in the fourth period, but the Bucks rallied and drew to within 3 points with 23 seconds to play. Mental errors abound for the entire team tonight, which is why it should count itself lucky to have Turkoglu, Lewis, and Howard being "on" simultaneously.

I hate to pick on J.J. Redick, but his play down the stretch in this game was mind-boggling. After a Charlie Villanueva tip-in brought Milwaukee to within 10 points, 102-92, the Bucks initiated their full-court press. Johnson received the inbounds pass and quickly fired to Redick near midcourt. Redick saw an open lane to the basket--and to be fair to him, it was a wide path--and drove the ball. Unfortunately, he simply blew the layup after a Milwaukee defender slid over in time to challenge it. Only 8 seconds ran off the clock, leaving the Bucks plenty of time to draw closer. Richard Jefferson, who paced Milwaukee with 25 points, threw the ball away, giving Orlando another chance to put the game away. Redick airballed a three-pointer, igniting a Bucks fast break which lead to a beautiful pass from Ramon Sessions to Jefferson on the right wing. Jefferson nailed the triple, making the score 102-95 in Orlando's favor with 1:09 to play.

Of course, the Magic went on to win the game, so maybe it doesn't matter. And, to coach Stan Van Gundy's credit, he let Redick play through his mistakes. Finally, you'd rather see the team screw-up early in the year instead of in, say, April. That's why I'm not going to get too up-in-arms about a game in which Tony Battie committed an offensive three-second violation and a defensive three-second violation on consecutive possessions. Again, if anything, Orlando should concern itself more with Nelson's potential absence than its sloppy play tonight.

The Bucks didn't exactly play with their heads on straight, either. I counted three situations in which they fouled a three-point shooter. Charlie Bell committed the strangest one when, arms flailing about, he barreled into Redick well after J.J. released the shot. Hellow, four-point play. Still, the Bucks apparently don't think much of J.J.'s play this season. Milwaukee coach Scott Skiles called upon Tyronn Lue to guard Redick, putting the younger Sessions on the veteran Johnson. Wow.

Final note: Dwight Howard's defense tonight was astounding. To block 6 shots (against 5 fouls, some of them very dubious) in only 31 minutes is [fill in the blank with your own superlative]. Well done.

Orlando faces the 76ers on Wednesday night for its first rematch against any team this season. Meanwhile, as Magic play-by-play commentator David Steele pointed out, the Bucks play at Atlanta on Wednesday and at Detroit on Friday, a point he punctuated with a wry, "Happy Thanksgiving."