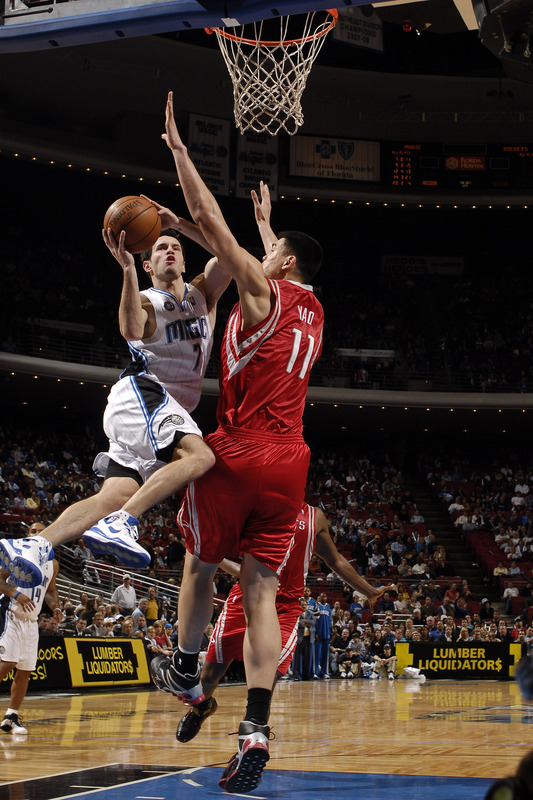 J.J. Redick of the Orlando Magic shoots against Yao Ming of the Houston Rockets on Saturday night. The Rockets won, 100-95, thanks in large part to Yao's 22 points and 13 rebounds.

Yeah, I'm way late with posting this recap. That's okay because there really isn't much to say about this game. It was pretty straightforward. Both teams played well, but the Rockets played better and got the win thanks to suffocating second-half defense; they held the Magic to 31.7% shooting in the second half, including 13.3% from beyond the arc. It's not as though the Magic play incompetently, and the effort they showed last night will probably beat most teams, since most teams don't defend like Houston. And really, can the Magic complain about a five-point loss when they got season-best games from Jameer Nelson, J.J. Redick, Anthony Johnson, and Adonal Foyle?

Speaking of Adonal, he deserves a loud, sincere ovation for his play last night. Activated for the second time this season, and playing for the first time since the playoffs, Foyle was called upon to defend the 7'06" center Yao Ming, and he did well. The 10-year vet refused to let Yao establish position where he usually does; Foyle's low center of gravity, coupled with his strength, helps in that regard. All told, Adonal contributed 4 points, 7 rebounds, and 3 blocks in only 13 minutes. One of his two field goals came as part of a successful pick-and-roll with Anthony Johnson, who may be the only man alive who can deliver a pass Adonal's stone hands can handle--and I say that in the nicest way possible. Kudos to Adonal for being ready to play. He lived up to his reputation as a consummate professional last night.

I'd like to add that Mickael Pietrus had another night filled with foolish errors. In the first 7 minutes of the game, he managed to throw two passes way out-of-bounds, charge into Chuck Hayes for a no-brainer offensive foul call, and commit an offensive goaltending violation. To his credit, he also added a thunderous dunk after slithering free along the baseline, at which point Rashard Lewis delivered a beautiful feed. Still, he needs to play smarter ball than he is right now. The Magic can ill-afford to commit too many turnovers against a team as dangerous as the Rockets.

Lewis finished with 18 points on 6-of-21 shooting... and 5-of-12 from beyond the arc. He went 1-of-9 from two-point range. Rockets reserve forward Carl Landry, a second-round pick like Lewis was 11 years ago, held his own against the Houston native when he tried to post him up. Maybe Lewis was more intimidated by Yao's presence in the paint than Nelson and even Redick were; J.J., in fact, drove the ball right at Yao with the Magic trailing by 7 with less than a minute to play. He drew the foul and nailed the two free throws. Redick scored 13 points on the night, 8 of them from the foul line-and was on the team's "offense" unit during crunch time, in which Stan Van Gundy made offense/defense substitutions at every opportunity.

As expected, Yao held Dwight Howard in check throughout the game, Yao drew 2 of Howard's 4 fouls, although Howard somewhat made up for that by drawing some fouls on Yao, all in the second half. The game further convinced The Dream Shake that Yao is the best center in the league; the title of Dream Shake's game recap is simply "Yao > D-Ho". We disagree on that point, but I'm going to leave that argument alone. It's not worth making.

A disappointing loss, yes--the Magic lead by 2 at halftime--but not a disheartening one. The Magic will try to get things going again tomorrow night against the Milwaukee Bucks.