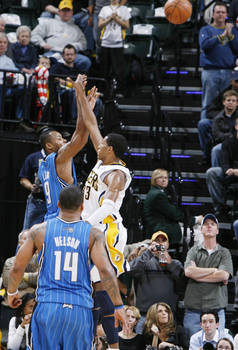 Rashard Lewis of the Orlando Magic shoots the go-ahead jumper over Danny Granger of the Indiana Pacers. The basket gave the Magic a 100-98 lead with 23 seconds to play in overtime. Orlando won by that margin after a strong defensive stand.

The Orlando Magic continued their strong, heady play in games away from home by defeating the Indiana Pacers at the Conseco Fieldhouse in overtime, 100-98. Dwight Howard lead the Magic with 24 points, 17 boards, and 5 blocks. Jameer Nelson added 22 points and 9 assists, while Rashard Lewis scored 7 of his 23 points, including the go-ahead basket, in the extra frame. The Magic withstood a strong effort from Marquis Daniels, a graduate of Orlando's Edgewater High, who scored a season-high 25 points to lead Indiana.

For the third straight road game, Orlando trailed early, only to clamp down on defense while its offense came around. Howard, Lewis, and Nelson each made several clutch plays in the figurative absence of Hedo Turkoglu. The Magic's usual go-to scorer played miserably the whole night and was little more than a spectator in the fourth quarter in overtime.

Nelson lead the Magic's fourth-quarter rally after sitting the first four-plus minutes of the period. He and Lewis were dynamite in the closing minutes of regulation, as the following list illustrates:

The period closes with Indiana scoring 3 more points--Danny Granger went only 1-of-2 at the foul line on a key possession--and the Magic only scoring 2, off a Nelson jumper. On the final possession of the period, the Pacers run a high screen-and-roll with Ford and Nesterovic. Ford dribbles right, but gets trapped. He has no choice but to pass back to Nesterovic, a decent shooter who is nonetheless reluctant to shoot a long jumper with the game on the line. He drives to his right and lofts a hook at the basket. Howard blocks it cleanly. The Magic head to overtime, where they were 3-0 last year.

Nelson's shooting touch vanished in overtime, as he missed badly on his only two shot attempts. Luckily, Lewis was still on fire. He hit a deep three-pointer, which tied the game at 96, to answer Granger's buzzer-beating three on the Pacers' previous possession. After Howard hounded Nesterovic into a missed layup on the other end, he rebounded strong, established possession, then headed upcourt for Orlando. This time, the Magic isolate Lewis on Marquis Daniels, over whom he has a four-inch height advantage. With Howard, Turkoglu, and Keith Bogans drifting on the weak side, Nelson dumps the ball to Lewis on his preferred spot--the lower left block, extended--so Lew can go to work. He takes a few dribbles, then spins baseline and lofts in the fadeaway jumper. The Magic lead, 98-96, with 2:12 to play.

And here's where the game gets real interesting. Make the jump to read how the rest of it played out, as well as some general observations.

After Lewis' go-ahead jumper, the Pacers inbound the ball and look to their coach, Jim O'Brien, who elects not to call timeout. Ford dribbles upcourt with his head turned toward O'Brien to hear the play-call. The Pacers go to Daniels, who has the hot hand with a team-high 23 points, but he struggles to get a shot off. It's well off the mark, but a blown box-out assignment leaves the lane open for Daniels to collect his own miss and put it in, tying the score at 98 with 1:35 to play.

The Pacers' defensive intensity has really picked up in overtime, and the Magic have to work hard for all their looks. There isn't an exception on this play, as Nelson misses a long 26-footer which caroms out of bounds. Again, the Pacers do not call time out, and again Daniels gets the call. His errant shot falls out of bounds, giving the Magic possession.

Nelson, perhaps tired, isn't quite as quick as he was during the Magic's big fourth-quarter run. He can't get past Ford, who never runs out of energy, and takes a stepback, fadeaway jumper, with the emphasis on the step; I doubt I've ever seen any player at any level cover as much ground as Nelson did as he hopped backwards on that shot. Granger rebounds the miss, and the Pacers take a full timeout.

On the inbounds, the Pacers get the matchup they want; Troy Murphy, a left-handed, 6'11" power forward with post skills AND a reliable jump shot, gets the ball against Howard on the left side of the lane. Murphy drives right at Howard with his right hand, and appears to have him beat. As he leaps to lay the ball in, Howard swats the ball with his left hand and--here's the crucial part--keeps it in play rather than swat it out of bounds. Bogans is in the right place at the right time and recovers the ball in front of Orlando's bench. The Magic call for time.

As one might expect, the Magic run a screen-and-roll with Nelson and Howard; in other games, Turkoglu may have handled the ball, but both his decision-making in this game was bad (2 assists, 4 turnovers) and his shooting was worse (1-of-13[!]). In any case, Nelson dribbles left around Howard's screen. Just before Nelson comes around the screen, Lewis cuts across the baseline, from right to left, bringing Granger with him. When Nelson comes fully around the point of the screen, Granger must make a split-second decision: step forward to cut off Nelson's penetration, or stay with Lewis and hope one of his teammates rotates over in time. He decides to step forward, and Nelson reads it perfectly. He stops immediately and fires a crisp chest-pass to Lewis, who has his feet set and shoulders square on the left baseline, a step or two beyond where he hit the tying jumper moments ago. Once again, Lewis is right on the money. Orlando leads, 100-98, with 23 seconds to play. The Pacers call timeout.

I don't know what went on in the Pacers' huddle, but if what happened is what was supposed to happen, I don't agree with it. Granger never touches the ball, and Daniels gets only a brief handle. Ford and Nesterovic play a two-man game, with Nesterovic rifling the ball back out to Ford, who has to take a fadeaway jumper with Howard lunging at him. He misfires at the last second. Turkoglu grabs the rebound--perhaps the first good thing he's done tonight--and the Magic escape with the win.

The game was a real blast to watch, despite the poor shooting by both teams in the second half. For the most part, the misses were due to lock-down defense, not poor decisions, which made the game a bit more watchable. Once again, the Magic battled back after trailing for most of the game. Although the offense was horrid on the game--the offensive rating of 96.2 was the team's worst since going for 93.3 against Memphis--the defense made up for it. The team's late-game execution was superb, and it's encouraging to see that the team snapped out of its bone-headed, first-half play.

The Magic flew to Orlando immediately after the game to take on Houston tonight. The Rockets were also traveling, as they played the Wizards in D.C. as the Magic were battling the Pacers.