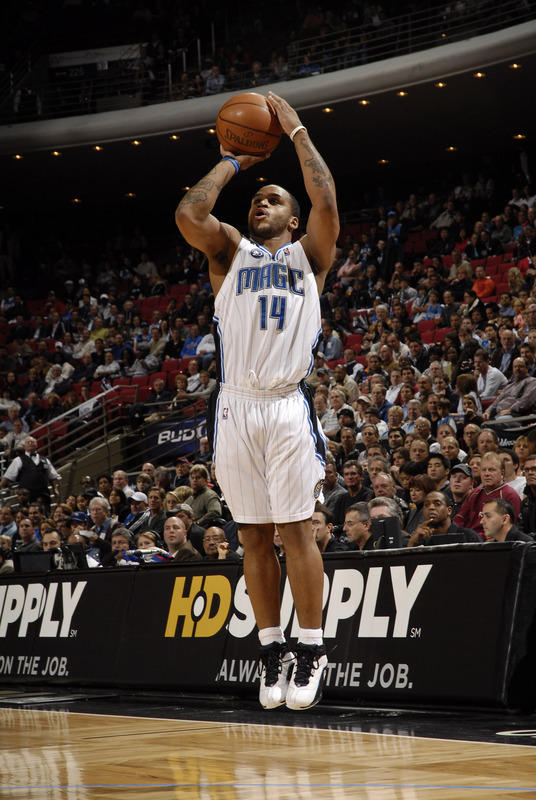 Jameer Nelson of the Orlando Magic takes a jump shot against the Toronto Raptors on November 18th, 2008. The Magic won the game, 103-90

Kelly Dwyer of Yahoo! Sports called last night's Orlando Magic/Toronto Raptors playoff rematch the NBA's "Game to pay attention to". It certainly didn't disappoint. The game was closer than the final score may indicate. The teams were knotted at 45 halfway through, the Magic only lead by 6 points heading into the 4th quarter, and the Raptors were still within 6 with two minutes to play. A three-pointer by Orlando's Hedo Turkoglu 16 seconds later ended Toronto's mini-rally. Ultimately, the Raptors' poor ball handling--24 turnovers in a 99-possession game simply will not get it done--and their inability to stop Jameer Nelson and Turkoglu from nailing perimeter jumpers cost them the game. It's a shame, too, as Chris Bosh once again lit-up the Magic for 40 points (on 14-of-19 shooting) and 18 rebounds. What a waste.

Obviously, the Raptors missed point guard Jose Calderon, who sat out his second straight game with a strained hamstring. Will Solomon started in his place, and stunk up the joint with a Palacio-esque line of 10 points (5-of-13 shooting), 4 assists, and 7 turnovers. He made poor decisions all night, on both sides of the ball. On offense, he'd either throw the ball directly to Magic players or he'd get caught in midair without a shot or a pass. Defensively--and Magic television color analyst Matt Guokas pointed this out several times during the broadcast--he refused to go over screens to cover Nelson, leaving Orlando's budding star point guard open for jumpers all night. Nelson made him pay, shooting 10-of-15 for 22 points. I wasn't too impressed with Solomon's backup, 24-year-old rookie Roko Ukic, but he should have played more than 16 minutes tonight. Solomon was that bad.

The Magic started this game flat, which didn't surprise me. and let the Raptors score 26 points on 61% shooting in the first period. Bosh scored 6 and Jermaine O'Neal scored 10 of those points. O'Neal, though, got in foul trouble and was a non-factor for the rest of the game, contributing only 6 more points the rest of the way. Quite frankly, I forgot he played at all in the second half. Then again, it's hard for a player to make an impression when he can't get the ball because his point guard is busy throwing it away.

The Magic's defense--or perhaps Toronto's awful offense--kept them in the game until their own offense began to click. It took a while. Neither Dwight Howard nor Hedo Turkoglu made a field goal until more than halfway through the second quarter. It was Howard's first bucket, an awkward hook, that ignited 12-2 Orlando scoring run to tie the game at 41. The Magic had momentum heading into the locker room, even though the game was tied, and pulled away in the third quarter. Fittingly, J.J. Redick made the biggest momentum-changing shot of the game. One possession after drilling an 18-foot jumper over the prone body of Anthony Parker, who flopped on the play, Redick connected on a silky-smooth three-pointer from the left wing. That bucket bumped Orlando's lead to 60-50, blew the roof off the Amway Arena, and forced Raptors coach Sam Mitchell to burn a timeout.

Turkoglu, who was one of the NBA's leaders in fourth-quarter scoring last season, showed the same killer instinct tonight. He started the period quickly scoring 7 points on 3-of-3 shooting--all jumpers--in the first 1:42. The last shot in that sequence pushed Orlando's lead to a fairly comfortable 80-69. He added three more three-pointers later, including a back-breaker to answer Andrea Bargnani's trey on the previous Raptors possession to put Orlando ahead, 97-88, with less than two minutes to play. His overall stat line--22 points on 8-of-20 shooting--won't impress many people, but make no mistake: his fourth-quarter marksmanship likely saved the game for Orlando, which may have not withstood Bosh's 40-point outburst without it.

It seems wrong not to mention that Nelson and Turkoglu were not the only Magic players to score 22 points, a team-high. Rashard Lewis also scored 22. He is a phantom.

More thoughts on Bosh's excellence, Howard's struggles, and J.J. Redick's performance in his first career NBA start after the jump.

That Chris Bosh scored 40 points against Orlando should come as no surprise; Magic coach Stan Van Gundy predicted as much before the game. Further, of the six games in his career in which he's scored at least 40 points, three have come against the Magic. He simply has their number. I didn't keep track of his shot breakdown during the game, but it didn't seem to me that he missed any of the jumpers he took from the top of the key. ESPN'com's shot chart bailed me out by showing he went 5-of-7 from that distance. More impressively, I recall all of those looks being contested. The man is 6'10", can handle the ball, and does not miss from 18-feet even when the hand of another 6'10" man is in his face. And he's 24. Fear him.

For anyone wondering if the Magic should be concerned about Howard's second consecutive relatively pedestrian game, in which he scored 18 points (5-of-10 shooting), grabbed 9 rebounds, and blocked 3 shots before fouling out, the answer is "no." O'Neal is certainly one of the league's best post defenders, and he did a great job of keeping Howard from establishing position. In other words, Howard's struggled only because of the matchup, not because of effort, as it was against Charlotte on Sunday. He'll get it going again soon.

Curiously, I did not notice Howard and Bosh--two close friends--greet each other after the game. Perhaps someone who attended the game can correct me, but I believe Howard headed for the locker room after the game, rather than meeting Bosh at midcourt. Magic television play-by-play man David Steele noted that Howard had words with Bosh after Bosh drew his sixth foul.

Final note: J.J. was solid. He needed 9 shots to get his 10 points, but his missed were in the flow of the offense; two of them rattled in and out of the basket. Should Mickael Pietrus miss Friday's game at Indiana, Redick should once again get the starting nod. He earned it tonight, especially with his defense. His talk of working out this summer was not bluster; he really did appear quicker and stronger tonight. Anthony Parker isn't the league's toughest cover, but Redick never got burned by him. He also made a great help play when he deflected a pass intended for a wide-open Bargnani out of bounds. Overall, I was pleased with his performance.