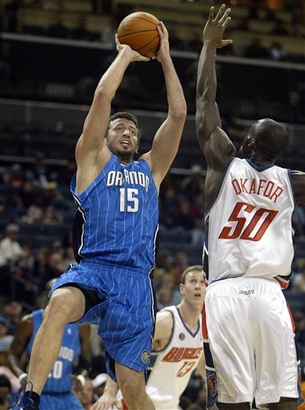 The Orlando Magic came from behind to defeat the Charlotte Bobcats, 90-85, in a Sunday matinee in Charlotte, North Carolina. The Magic were paced by Hedo Turkoglu's 20 points, while Mickael Pietrus added 18 in another strong offensive effort. Jameer Nelson provided a spark in the third period, scoring 9 points on 4-of-4 shooting as Orlando took a lead it would not relinquish.

But the real story in the game is the utter nullification of Dwight Howard, the Magic's All-Star center. The Bobcats, a middling team by any estimation, appear to be ill-equipped to stop Howard, even considering the defensive fortitude of Emeka Okafor, their second-highest-paid player and Howard's rival. In the first place, the Magic were out-of-sorts offensively in the early going, and rarely looked for Howard in the low post. When they did, Okafor denied him the ball. Fittingly, when Howard used his first offensive possession at the 4:54 mark of the opening period by going up with a hook shot, Okafor swatted it cleanly away. Conditions did not improve for Dwight later. Perhaps rattled by his slow start, he rushed his next 3 field goal attempts and missed them all badly. Give Okafor, and the rest of the Bobcats, a lot of credit for limiting Howard on offense.

Please make the jump to read the rest of this recap.

However, we should give Howard some credit for his defense. Sure, he fouled out, but he still blocked 5 shots and altered several others. He also kept his hands active in the passing lanes and came up with two steals. But mostly we should thank Tony Battie, who played arguably his finest game in a Magic uniform in relief of Howard. Battie was at his absolute best today: offensively, he scored on open, in-rhythym 18-footers and stick-backs; defensively, he stayed in front of his man, boxed out, and blocked 2 shots. Oh, and he was not averse to hitting the deck for loose balls. I love this version of Tony.

What I do not love is what we're seeing from the other Tony on the roster. Anthony Johnson had a splendid preseason, but is playing simply awful basketball right now. He badly missed all 5 of his shots yesterday and finished with only 1 assist, which he would not have gotten had Jared Dudley not made one of the worst defensive rotations I've ever seen: Dudley guarded Rashard Lewis at the three-point line when Lewis dumped the ball in to Johnson, posting up rookie D.J. Augustin, on the left block. Dudley left Lewis (!) to double-team Johnson (!!), who immediately kicked the ball back out to Lewis for a three-pointer. But that's not the point of this paragraph. Maybe the Magic see something in Johnson that I don't. Maybe he can return to his preseason form. But right now, they are kidding themselves if they think they can make it through a whole season with him logging heavy minutes. Thank goodness Jameer Nelson is playing lights-out right now, because if he weren't the problem would be that much more apparent.

If anything, this win proves two things: Dwight Howard is mortal; and the Magic can win, albeit sloppily, when he's on the bench provided that Nelson and Hedo Turkoglu--who scored the quietest 20 points imaginable--step up their games. It's not ideal, or pretty, but it worked. And, really, who are we to complain about two straight come-from-behind road victories?

Check out Queen City Hoops' recap for a different take on the game.

The Magic will be put to the test tomorrow night against the Toronto Raptors, who are eager for revenge after losing to the Magic in last year's playoffs.