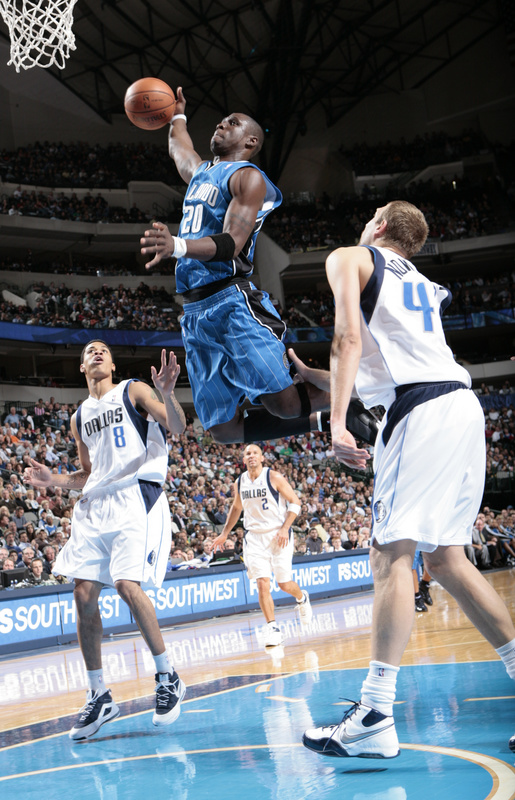 Orlando Magic guard Mickael Pietrus skies to the basket for a dunk against the Dallas Mavericks.

If I were to tell you before tonight's game between the Orlando Magic and the Dallas Mavericks that the Magic would shoot 38.8% from the field; 73% from the foul line; surrender 69 points to Josh Howard, Dirk Nowitzki, and Jason Terry; and get only 18 points on 6-of-14 shooting from Dwight Howard, you'd probably guess that they would be soundly defeated.

You would have been wrong. Orlando overcame the above factors, as well as a 10-point halftime deficit, to win in Dallas for the first time since three days after Dwight Howard's 12th birthday. Rashard Lewis paced the Magic with 23 points, and Jameer Nelson added 21. It's a cliche, but it's true: good teams find a way to win. Orlando is a good team and managed to eke out a victory tonight. Bam. I just blew your mind.

Rashard Lewis ended up being the hero, making the clinching free-throws for Orlando, and Nelson's on 9-of-18 shooting--he was the only Magic player to shoot at least 50% from the field---was a pleasant surprise, but they were not the Magic's top performers tonight. That honor goes to Mickael Pietrus. Though his signing over the summer did not make many waves, his play in the young season has. Pietrus drilled a season-high 5 three-pointers, including 2 back-breakers in the fourth quarter, en route to a 20-point, 9-rebound outing. Perhaps more impressively, he made all 5 of his free-throws. A career 67.1% free-throw shooter, Pietrus is now shooting 90% this season. Magic coach Stan Van Gundy was confident enough in Pietrus that he allowed him to shoot a technical free throw this evening. So far, Pietrus is exceeding all expectations, and his offensive contributions were welcome on a night when Hedo Turkoglu was limited to 28 minutes due to foul trouble.

I'd complain about Howard's poor showing, and about reserve guard Anthony Johnson's lousy shooting (1-of-8), but I'll let it well alone. The boys won. Plus, Dallas fans have more to complain about anyway. Their team still hasn't won a game at home this season and sits in last place in the Southwest Division. Ouch.

Orlando will take the floor Sunday afternoon for a matinee against the Charlotte Bobcats, who are missing Jason Richardson, their leading scorer. A victory will mean a 3-0 mini-roadtrip for the Magic as they try to duplicate last year's success away from home. Fantastic.