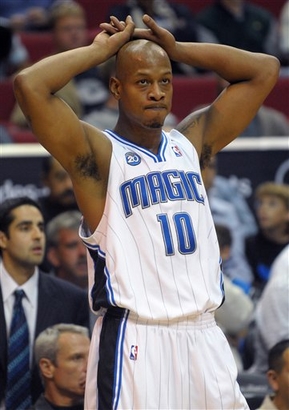 Orlando Magic guard Keith Bogans shows frustration after a foul call in his team's 106-99 loss to the Portland Trail Blazers.

35 points from Hedo Turkoglu, 29 points and 19 rebounds from Dwight Howard, and all the Orlando Magic have to show for it is a big, fat, L in the standings. The Portland Trail Blazers, led mostly by their second unit, held the Magic without a field goal for a stretch of 11 (!) minutes in the second half. Two monster games from the team's best players were wasted, as was the chance to make franchise history by going 5-0 on a homestand.

This game showed a contrast in styles between the two teams. Orlando believes it can contend now and has surrounded its young, core pieces (Howard and Jameer Nelson) with borderline All-Star-caliber veterans (Turkoglu and Rashard Lewis) as well as less-heralded role-players (Tony Battie, Keith Bogans, and Anthony Johnson). Meanwhile, Portland is fielding a competitive team stacked with young talent--Rudy Fernandez, a 23-year-old rookie shooting guard, is averaging 14 points per game off the bench--at every position, with veterans like Steve Blake and Joel Przybilla setting the example.

Yet it was the older team that played scared tonight. Perhaps "scared" isn't the right word, but down the stretch they played tentatively against a team they should have beaten. Even after the Magic went cold to start the fourth quarter, failing to score on their first 12 possessions, they kept settling for outside jump shots. It's baffling that they didn't at least try to put the ball on the floor and get to the rim, especially since they were in the bonus. Oh yeah, and they have that Howard fellow underneath the bucket. Give him the ball.

Things weren't good defensively, either. Portland opened the game on fire, shooting 13-of-21 from the field and 5-of-6 from three-point range. I kept saying to myself and to my buddy Lane, "They can't keep this up, can they?" Well, they didn't exactly shoot the lights out the rest of the game, but they did finish 9-of-17 from beyond the arc. It's not like they were catching lucky bounces; all their shots were in-rhythm and hit nothing but the bottom of the net. The Magic's defensive rotations were a step slow all night. Against a team like Portland, that a) has a roster full of sharp-shooters and b) can move the ball well, that's a recipe for disaster.

This loss was inexcusable, moreso than the one to Memphis on Halloween night. The onus is on everyone not named Hedo; Dwight; or Keith Bogans, whose 12 points were all Orlando's bench could muster.

No, really. Keith Bogans was the only one of 4 Magic backups to score. Time to hit the panic button? Maybe.

this was a very, very winnable game- a game we probably would have won last year. we have no depth and aren't sneaking up on anyone this year.

I agree. This team showed far more poise last year, especially Rashard Lewis, who hit several clutch jumpers in November and December to ice games. Not so much this year. He's missed 17 of his last 22 shots from the field. Awful.

This team, on the whole, is struggling. I just keep telling myself, "It's only November, calm down," but that's not such a great argument. None of Orlando's wins have impressed, and all of its losses have raised concerns, specifically about depth and attitude. The former can't be changed without a trade (or a change in coaching philosophy...), and while the latter is more malleable, it's still unlikely to improve, given this team's history of, frankly, blowing it.