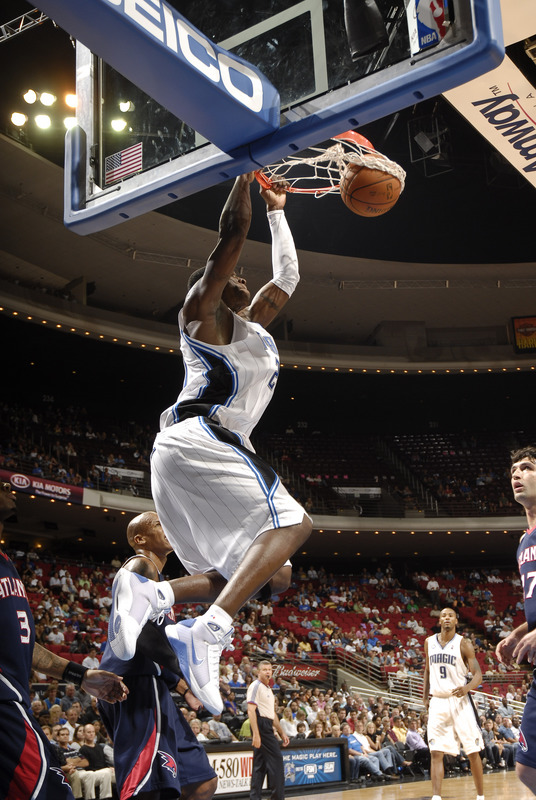 Mickael Pietrus dunks for 2 of his 9 points in the Orlando Magic's 118-101 loss to the Atlanta Hawks on Monday night.

I'm not sure what the heck happened to the Orlando Magic in last night's 118-101 trouncing at the hands talons of the Atlanta Hawks -- the game wasn't televised to begin with, and I had the worst time getting Audio League Pass to work -- but whatever it was, it sucked. The Magic blew an early lead by gifting the Hawks 45 points in the third quarter. Dwight Howard (17 points, 5 rebounds, 8 blocks), Rashard Lewis (22 points, 6 rebounds), J.J. Redick (12 points on 5-of-8 shooting in 19 minutes), and Anthony Johnson (8 points, 4 rebounds, 6 assists, 2 turnovers) were the only Magic players to impress.

The Hawks, a mediocre team as presently coached, placed six players in double-figure scoring. Just as in last year's preseason game, Acie Law IV played a key role in sinking the Magic: last October, in his first professional appearance, he made a crucial, tie-breaking layup for Atlanta after stealing the ball from Magic guard Carlos Arroyo. This year, he lead his team in scoring (20 points) and punctuated its 45-point third quarter with a three-pointer from beyond halfcourt at the final buzzer.

Plenty more thoughts about the game, as well as a four-factors breakdown of it, after the jump.

As I look at the team numbers for Orlando, I see very little that's encouraging. We hoped that the return of Tony Battie from shoulder surgery would bolster the Magic's weak rotation of power players and help on the glass. And while Battie lead his team with 7 boards, the Magic were still outclassed in that aspect of the game. The Hawks held a 42-31 advantage overall. They rebounded 32.5% of their own misses, while only allowing the Magic to rebound 12.1% of theirs. As a result, they took 12 more shots than the Magic did.

Three-point shooting was also an issue. While the Magic shot an excellent 46% from beyond the arc, they only took 11 shots from that distance. That's entirely too few attempts for a team that placed 4th in the league in three-point percentage last year.

Finally, Hedo Turkoglu, the reigning Most Improved Player of the Year, was conspicuously invisible. In 28 minutes, he took 7 shots and finished with 7 points. When we do the math, we see that'd equate to 9 shot attempts (and 9 points) per 36 minutes. Last season, Turk averaged 14.5 shot attempts per 36 minutes. He needs to increase his usage rate by taking more shots and by committing fewer turnovers (4 last evening) if the Magic are to fare as well as we hope they will this season. But this concern is minor because the situation isn't likely to repeat. Speaking again about last season, Turk never played at least 28 minutes without taking at least 7 shots.

But we need not press the panic button just yet. Maurice Evans, who left the Magic this summer in free agency, finished with 17 points on 6-of-9 shooting. Law finished with 20 points on 8-of-11 shooting. It's highly unlikely that they will shoot as well against the Magic during the regular season. Further, the loss gave Magic coach Stan Van Gundy the opportunity to say pithy things to the media about his team's poor performance. Regarding Dwight Howard's 8 blocked shots, Van Gundy said, "He got a lot of (block) opportunities because of our total inability to keep the ball in front of us. So in that sense I guess his teammates helped him."

As we can see, the only category in which the Hawks hold a significant advantage is offensive rebounding. There's your difference-maker.

The Magic will try to regroup tomorrow night against the Charlotte Bobcats.