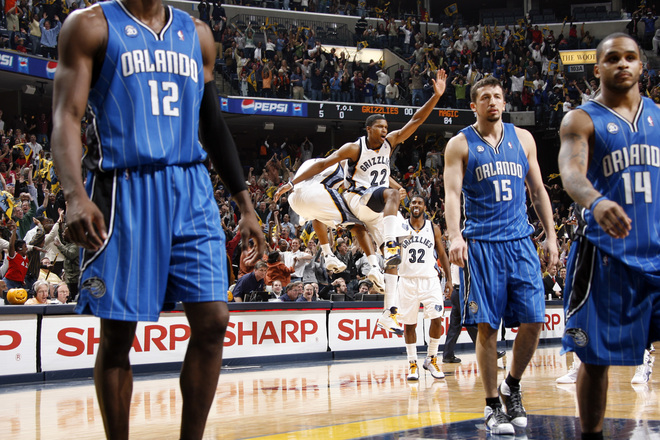 Dwight Howard, Hedo Turkoglu, and Jameer Nelson of the Orlando Magic walk off the floor as Rudy Gay of the Memphis Grizzlies celebrates after making the game-winning jump shot to defeat the Magic, 86-84, on Halloween.

UPDATE: Put a more fitting picture at the top. I hope Stan Van Gundy tapes it to every Magic player's locker tomorrow.

The Orlando Magic didn't care, so I don't either; I am mailing this recap in. Orlando dropped its second straight game, 86-84, this one to the Memphis Grizzlies. With 2.8 seconds remaining in the game, Rudy Gay missed a jumper that would have put the Grizz up 2 points. The rebound trickled out-of-bounds, giving the Magic the chance to take the final shot of the game. After a Magic timeout, diminutive guard Kyle Lowry intercepted Hedo Turkoglu's inbounds pass, intended for Dwight Howard, and called a timeout of his own. Gay got another chance to win the game after Memphis' timeout, and he did, connecting from 20 feet at the buzzer. Game over.

The Magic took a 55-43 lead going into the second half, then only mustered 29 points the entire second half. They shot so poorly I can't even be bothered to look it up. For the second straight game, an inferior team outworked the Magic and earned the victory. Sure, it may be only two games into the season, but that's a disturbing trend.

In the nearly two years I've covered the Magic, I've never been so disgusted with a loss. Unacceptable. Y'all can vent in the comments. I'm done with this team for the night.

Oh, and if you really feel like depressing yourself, you can read the comments in the GameThread. Things went to Hell rather quickly in the second half.