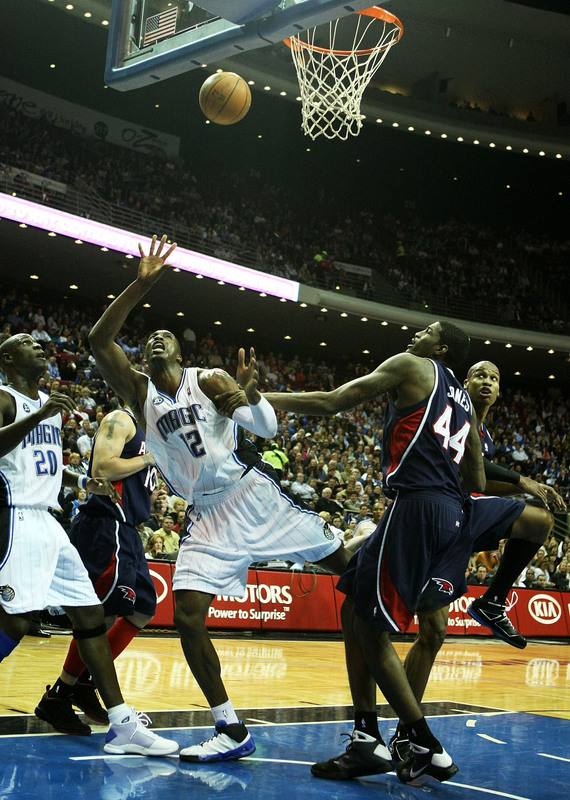 The season was not supposed to get off to such a horrible start, but it did anyway. From beginning to end last night, the Orlando Magic were outhustled by an inferior Atlanta Hawks team missing one of its regular starters. That lack of hustle became especially important in deciding the outcome of the game, since sometimes giving a strong effort can compensate for poor shooting.

That fact was on display in the early stages of the second quarter. Orlando trailed, 28-13, after the first quarter, but mounted a comeback in this manner:

And that's about where Orlando's rally ended. Atlanta scored 7 points in less than a minute off a Maurice Evans three-pointer, a Ronald Murray transition layup ignited by an Al Horford block, and a Joe Johnson transition dunk ignited by an Al Horford steal. In these sequences, the Hawks were quicker to every loose ball. And from 04:45 to 04:22, they were able to get three shots on one possession thanks to working hard for two offensive rebounds; the good news for Orlando is that they didn't convert on those opportunities. But suppose they had? The loss might have been more lopsided than it was. The 14-point margin matched the franchise-worst for a home opener.

More thoughts after the jump.

Indeed, the Magic were flat last night. And they were flat in the preseason finale against Memphis, only winning because the Grizzlies played even less inspired. The games count now, and the next one is against Memphis on Halloween night. John Denton reports the Magic swear they'll be ready. I'm not so sure. Where's the mental toughness on this team? Where's the hustle?

Here's a look at the Four Factors...

The Hawks shot better than the Magic did, but even when they missed, they got another chance nearly 40% of the time. Indefensible on Orlando's part. Credit Atlanta coach Mike Woodson for encouraging his players to work hard against Orlando; when everyone in the rotation is playing hard, the coach deserves some credit.

Stan Van Gundy, meanwhile, deserves some blame. His team signed Mickael Pietrus to be a defensive stopper against the league's elite perimeter scorers, a group to which Joe Johnson belongs. Pietrus kept Johnson mostly in check when assigned to him. So why did Van Gundy call on the smaller, less-athletic, and overall less-skilled Keith Bogans to defend Johnson in the fourth quarter, in which the All-Star scored 9 of his 25 points?

Mickael Pietrus, about whose ability to immediately contribute offensively we were concerned, was the only Magic player to stand out last night. He worked hard for his 20 points while minimizing his mistakes, finishing with only one turnover. The rest of Orlando's starting five--Jameer Nelson, Hedo Turkoglu, Rashard Lewis, and Dwight Howard--shot 22-of-56 from the field for 51 points. The Magic got minimal contributions from their bench (Brian Schmitz has an explanation as to why), which mustered 11 points on 3-of-15 shooting; for comparison, lightly regarded Hawks reserve guard Ronald Murray finished with 14 points on 5-of-10 shooting on his own. Again, I use the word "indefensible" to describe Orlando's play last night. Miserable all around.

However, it's only one game, and we should not get ourselves unduly worked up. The Magic are too talented to shoot bricks every night, and Van Gundy won't let the stragglers--J.J. Redick and Jameer Nelson, I am looking at you--straggle for too long before he cuts their minutes. Certainly the season could have started much better, but there are still 81 games to play. Remain calm.

Brief meta note: Thursdays are very busy days for me, which means recaps for some Wednesday games may be posted much later than I'd like for them to. My apologies. Of course, you're encouraged to write your own recap in the FanPosts.