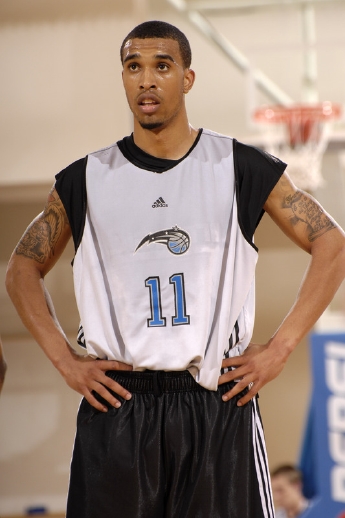 Courtney Lee takes a breather during a Summer-League Game.

We'd be remiss if we didn't wish Courtney Lee a happy birthday today. Lee, the Magic's first-round pick in this year's draft, is now 23 years old... or a little over two months older than Dwight Howard, who's entering his fifth season in the league.

The Magic drafted Lee as a shooting guard, but he may see some time at point guard this season. Magic coach Stan Van Gundy told Kyle Hightower of the Orlando Sentinel that Lee needs to be aggressive "instead of being a guy that just moves the ball." That advice jibes with what trainer extraordinaire and ESPN.com writer David Thorpe recommended to Lee a few weeks ago:

Lee has to stay aggressive and only pass when [Dwight] Howard is open in a good scoring spot. A passive player who constantly defers to Howard in the post gives the Magic a 4-on-5 look, an advantage for the defense.