Wondering if Mickael Pietrus is Really That Much Better than Maurice Evans, Keith Bogans, and Keyon Dooling

Share All sharing options for: Wondering if Mickael Pietrus is Really That Much Better than Maurice Evans, Keith Bogans, and Keyon Dooling 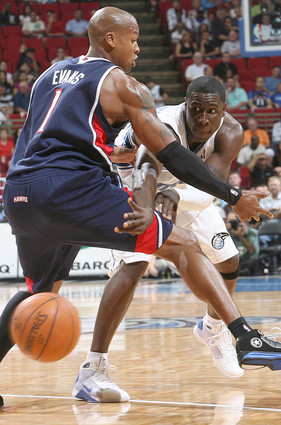 The Orlando Magic made their most important player acquisition this summer when they signed 26-year-old free-agent swingman Mickael Pietrus, formerly of the Golden State Warriors, to a four-year deal worth approximately $25 million, or the entire mid-level exception. Pietrus figures to start immediately at shooting guard, Orlando's weakest position last season. But is he really that much of an upgrade over Keith Bogans (35 games), Keyon Dooling (1 game), and Maurice Evans (46 games), who manned the starting two position last season? Can any team, even one with a frontcourt as strong as Orlando's, hope to win a championship with Mickael Pietrus in its starting lineup?

The answer is a bit hazy. We think he'll improve the defense at that position, but it's hard to tell about the offense. Let's take a look at some offensive statistics, with the obvious caveat being that Pietrus played under coach Don Nelson, known for playing unconventional, apositional lineups and encouraging them to run frenetically.

Comparative tables and analysis after the jump.

As the above table shows, Pietrus and the Magic's two-guards last season scored at about the same rate; I would adjust on a per-minute basis, but the average minutes played are so close that to do so would be superfluous. Pietrus is clearly the better rebounder and he records steals at a solid rate. But for me, the ultimate determination of Pietrus' value to the offense won't be the points he produces, but rather the efficiency with which he produces those points. And that's where things begin to look less rosy for the Magic and Pietrus:

Woof. Pietrus was a less efficient shooter than the Magic's starting two-guards in every respect last season. Yet the outlook need not be so grim. Let's compare Pietrus' statistics from two seasons ago, when he was a happier camper, with Orlando's starting shooting guard production last year:

Indeed, if Mickael Pietrus returns to his previous best level of play, he will give the Magic reason to believe that he is a significant upgrade over Bogans, Dooling, and Evans. But that return to form, should it happen, will not be immediate; Pietrus still needs to adapt to Orlando's offense, something with which he appeared to struggle during the preseason. Here are two final tables detailing his putrid performance in the games that don't count:

My advice for the Magic and their fans regarding Pietrus' play for the first month or so of the season: curb your enthusiasm. He may look awful early, but once he becomes better acquainted with Orlando's offense, he could break out. No, he won't ever be an All-Star, but he could turn some heads and prove to be a wise investment.