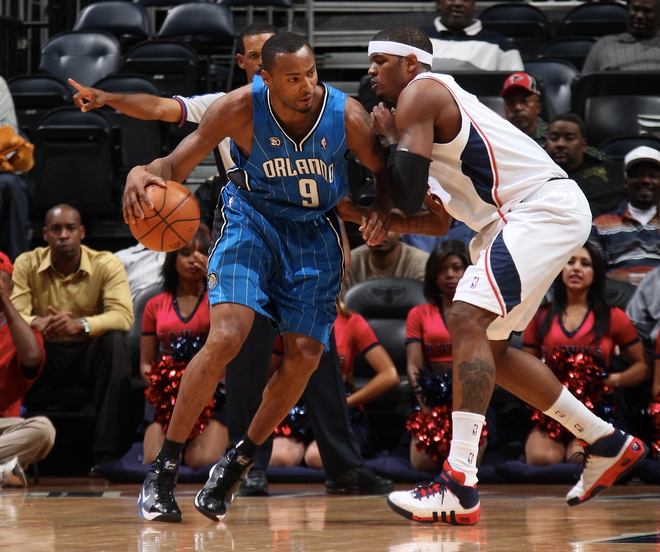 The Magic's Rashard Lewis tries to post up the Hawks' Josh Smith. Lewis finished with 25 points and 8 rebounds in Orlando's 109-103 victory over Atlanta.

SICK AND TIRED OF EACH OTHER: As fond as the Hawks are of Orlando and the Magic are of Atlanta, both teams have seen about enough of each other already. And they've still got one more date to go.

The "one more" to which Smith refers is the regular-season opener a week from tomorrow. I'm, frankly, a bit sick of the Hawks, so I'm going to play the "lazy" card and just link to the boxscore...

For the first time this preseason, the Magic swept all four categories. From that perspective, it was the Magic's best performance yet. But the low offensive rebound percentage is a concern, as is the high eFG% allowed. They'll figure out the latter; the jury's out on the former.

And as an ohbytheway sort of thing, Dwight Howard finished with 29 points and 11 rebounds. The Hawks had no choice but to foul him. Howard didn't do a great job of making them pay, shooting just 13-of-22 from the line. He also committed 7 turnovers.

For more on the game, check out Peachtree Hoops' recap.