Share All sharing options for: Mike Wilks' Injury Costs the Orlando Magic $998,398 and Inches Them Closer to Luxury Tax Territory 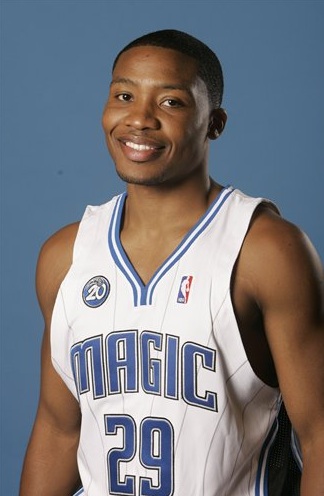 Mike Wilks, seen here during Orlando Magic Media Day, will miss the season after injuring his knee earlier in the week. The Magic, who now must pay all of Wilks' previously unguaranteed salary, are now in a bind as they try to avoid the luxury tax.

If the Magic plan on signing a third point guard to replace Mike Wilks, who will miss the entire season after sustaining a severe knee injury earlier this week against Charlotte, they're going to have to do it on the cheap.

This week-old blog post from Ira Winderman, who covers the Miami Heat for the South Florida Sun-Sentinel, says that players signed to non-guaranteed contracts, as Wilks was, are owed their full salary if they get injured. After consulting Larry Coon's NBA Salary Cap FAQ, I determined that Wilks' salary is $998,398, as he has six years of NBA experience. Even if the Magic cut Wilks to make room for another player on their roster, they still owe him that money and it still counts against their salary cap.

That last bit is especially important. The Magic can't afford to dip into the luxury tax. It's important that they sign a third point guard anyway, as point guard is arguably the most important and specialized postion in all of basketball. The fact that their other two point guards, Jameer Nelson and Anthony Johnson, are nursing injuries right now only underscores the importance of finding somebody -- anybody -- to fill Wilks' void.

So where do the Magic stand in terms of salary? I've created a Google Document which outlines their salary structure for the next several years; you can read it here. But for simplicity's take, here's an abbreviated version that covers only the 2008-2009 season:

More thoughts on what these numbers mean, and what the Magic can do, after the jump.

As you can see, the Magic are only $885,779 from crossing the luxury tax threshold. With the current salary structure, they could only offer a contract to a player with four years of NBA experience or fewer, as the minimum salary for players with five years is $926,678. Given this consideration, the Magic can immediately cross the names of 10-year veteran Jason Williams and 14-year veteran Darrell Armstrong off their wish list. Their best bet may be to reach out to two-time summer-league invitee and one-time training-camp invitee Kevin Kruger, currently at camp with the Milwaukee Bucks, because he has at least run the Magic's offense before. No, he doesn't have any regular season NBA experience, but he's better than nothing. And "nothing" is what the Magic have in terms of point guard depth behind Nelson and Johnson. Yes, Courtney Lee and Hedo Turkoglu have run the point in practice, but that matters little in the bigger picture. Point guard is Kruger's natural position, although he can shift to shooting guard, whereas Lee and Turkoglu naturally play shooting guard and small forward, respectively.

Additionally, this news likely spells doom for the chances Dwayne Jones and Jeremy Richardson had of making the team. Although their minimum salaries on their own ($ 826,269 for Jones and $ 797,581 for Richardson) would not put the Magic over the tax threshold, they would put the Magic over in combination with even a rookie point guard on a minimum contract ($ 442,114).

Whatever the Magic decide to do, their options are limited.

Wilks' injury created quite a problem, and how Smith solves it will impact the Magic's season, as it's unlikely Nelson and Johnson will remain healthy for the entire season. It'll prove to be quite the test for the much-maligned GM. If nothing else, this situation shows how tricky filling even the least significant of roster spots can be under the terms of this Collective Bargaining Agreement.