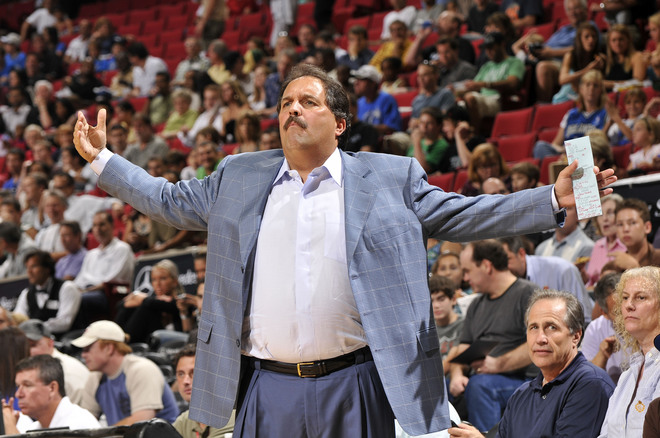 Orlando Magic players who needed a respite from Stan Van Gundy's voice during the offseason were pleasantly surprised to learn that Van Gundy has taken up text-messaging, Brian Schmitz reports.

Yesterday, the Orlando Sentinel published this amusing story from Brian Schmitz, who reports that the Orlando Magic bought Stan Van Gundy a BlackBerry device so he could text-message his players during the off-season. It's an effort to give the players a break from his loud voice and rather boisterous style of coaching:

"Quite honestly, seven months of me is a lot to take," Van Gundy said. "Players need and want a break from me. What I did more than anything was texting guys. I'm a technological type of guy now.

"The other thing is, that's not really as invasive to them. If they want to read it, fine. They can see it's from me and -- 'Click. Delete!' At least it lets them know that I'm thinking about them."

But not as high-tech as Erik Spoelstra, 37, the new coach of the Miami Heat. Spoelstra has presented each of his players with an iPod Touch loaded with the team's 300-page playbook. Although the iPod is team property, Spoelstra will let his players put their own music on it. Somehow, I get the idea that his predecessor, Pat Riley, would not be quite as... progressive...